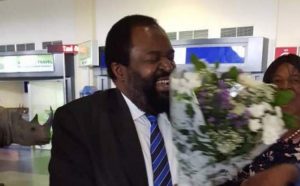 Self-exiled Zimbabwean businessman James Makamba is reportedly back in the country. Makamba is a entrepreneur, politician and former commercial broadcaster.

In February 2004, Makamba was arrested and charged with violation of Zimbabwe’s Exchange Control Act. Makamba was subsequently arrested on two separate occasions. He was tried and acquitted on all three occasions in both the Magistrate’s and High Court of Zimbabwe, after which he fled the country.