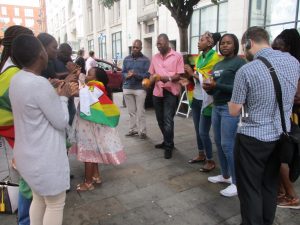 The European Union’s Ambassador to Zimbabwe, Timo Olkkonen, says corruption is destroying the country. He said the international appeal for a couple of hundred million dollars to prevent mass starvation would have been met by only a fraction of the stolen money.

Mr Olkkonen told Newsday: ‘Corruption has had a huge effect; you have people talking about hundreds of millions, even billions, in terms of the Auditor-General’s report’ (see: https://www.newsday.co.zw/2019/08/corruption-hurting-zim-more-eu/).

It emerged at a parliamentary hearing this week that the Treasury is unable to account for more than a billion dollars paid under the Command Agriculture programme which is supposed to support farmers with irrigation and inputs.

The money was paid to Sakunda Holdings, a company run by the ubiquitous Kudakwashe Tagwireyi, who is said to be a key player in the country’s extortionate fuel supply cartel and a conduit for funds to the army and Zanu PF bigwigs.

The extent of state capture in Zimbabwe is shown by Energy Minister Fortune Chasi’s order to the country’s power supply company to reverse a decision to cut off the farms of Zanu PF leaders, including Mugabe’s Gushongo dairy farm, for unpaid bills. The minister said that, given the drought and food shortages, now was not the time to disconnect any farmer.

After nearly 40 years in power Zanu PF leaders have become accustomed to living off the state. They have never had to pay their bills. Like former Defence Minister Sydney Sekeramayi, who is being sued for failing to pay a $311,000 electricity debt. The matter is yet to be set down for a hearing but no doubt Comrade Sekeramayi is busy dealing with ‘the drought and food shortages’.

Observers may well conclude that, with Generals Chiwenga and Moyo still off ill, there is certainly something poisonous going on in Zimbabwe. President Mnangagwa, himself a victim of Gushongo ice cream, may again have to stop his cavalcade to buy a safe burger on the street.