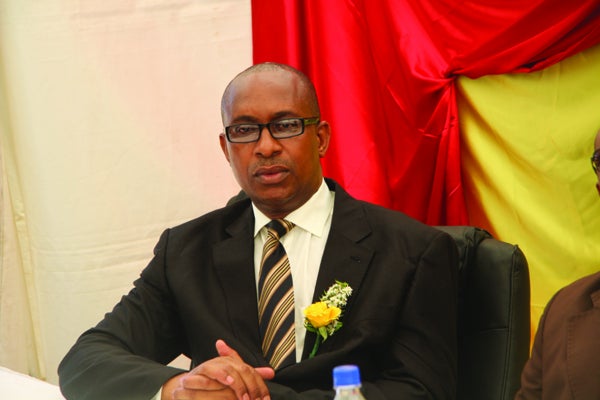 MDC-T deputy president Obert Gutu (OG) has been known on social media platforms to spit venom particularly against those who take him head-on. His views have made him popular and unpopular in equal measure, revered now by Zanu PF activists and hated by those sympathetic to the opposition MDC. NewsDay Senior Reporter Moses Matenga took time to ask questions on where the MDC-T stands, what the Political Actors Dialogue (Polad) has achieved, and whether his party was now a Zanu PF project. Below are the excerpts:

ND: What are your projections as a party for 2020?

OG: In 2020, we are focusing on galvanising our party structures as well as embarking on a nation-wide outreach programme.

We are also eagerly awaiting the outcome of the Supreme Court judgment concerning the leadership wrangles in the MDC post the unfortunate passing on of our iconic and founding leader, the late Dr Morgan Tsvangirai.

ND: What do you, as a party, miss about Tsvangirai?

OG: Tsvangirai was an icon. He was a suave, compassionate and well-meaning patriot and democrat. He was a very genuine team builder who sincerely and honestly loved Zimbabwe.

He was not power-hungry and because of this, he decided to pull out of the violent presidential election-run off that was held in June 2008, eventually opting to work in an inclusive government with his political nemesis, the late Robert Mugabe, a man who had routinely brutalised and terrorised him.

How many of us can be like the iconic Tsvangirai? Very, very few, if any. You now have got power-hungry and hallucinating political scavengers who will do anything to get into power.

Fortunately, Zimbabweans are smart and they can easily see through the apparent fakeness, emptiness and pretence, not to mention the glaring deficit of tact and strategy.

They will never, ever give the levers of State power to such political charlatans whose lust for personal political power and glory is legendary.

These are some of the major reasons why as a political party, we sorely miss the visionary and humble leadership style of the late Tsvangirai.

ND: You have been part of Polad as a party for a long time now. Any positives in your view given the state of affairs in the country?

OG: Let me start by clarifying the fact that Polad is not an arm of the State in the same trajectory as the Executive, the Judiciary and the Legislature.

Polad is merely a forum for political actors to talk and discuss pertinent and relevant national issues. To date, Polad has scored spectacular successes in that we have managed to convene several meetings involving different political parties in the same room and under the same roof.

We have held robust and no-holds-barred debate even with the President of Zimbabwe, His Excellency Emmerson Mnangagwa.

I, for one, always speak truth to power. We have made it abundantly clear to the Head of State that the majority of the people of Zimbabwe are suffering and also that it’s high time austerity measures are set aside.

We held a meeting attended by the Minister of Finance and Economic Development, Mthuli Ncube.

The Minister of Industry and Commerce, Sekai Nzenza, as well as the Reserve Bank of Zimbabwe governor John Mangudya and we also raised the concerns of the toiling and suffering masses of Zimbabwe.

If anything can be said, Polad is the voice of the silent and toiling masses of Zimbabwe. We are not noisy and garrulous, we are strategic and focused.

ND: Given the state of affairs in the country and the argument that political dialogue, genuine dialogue, is the solution to the crisis, your party has been in dialogue with Zanu PF and other parties. Why hasn’t the economy taken off and human rights abuses seem to continue?

OG: I have already indicated that Polad is not an arm of the State. Polad is simply a debating forum for political actors.

In fact, Polad has been more effective than the current Parliament of Zimbabwe, most of whose legislators are specialists in heckling and spewing toxic verbal garbage inside the august House, instead of focusing on real, tangible issues affecting the livelihoods of the people such as proffering solutions to the challenge of galloping inflation and the ever-rising cost of living that has rendered the majority of workers’ incomes totally valueless.

Under the Polad platform, we have strongly lobbied for the removal of austerity measures that are making the lives of ordinary people a complete and utter misery.

Under Polad, we are already well-advanced in debating and crafting far-reaching democratic electoral and media reforms.

Tell me, one big thing that the current Parliament has done for the people of Zimbabwe?

The only major thing coming out of the current Parliament is the sterling and outstanding work of our MDC-T legislator, Priscilla Misihairabwi-Mushonga.

She has fought like a lioness to ensure that sanitary wear for girls, starting with rural girls, is made freely available.

Her Portfolio Committee on Primary and Secondary Education has also resolutely fought for the introduction of free primary and secondary education.

Just give me one salutary achievement that the other opposition back-benchers have achieved besides clamouring for new SUV vehicles, diplomatic passports and increased salaries and sitting allowances.

ND: Some Polad members, Brian Mteki in particular, have joined Zanu PF, giving credence to claims that Polad has always been a Zanu PF project and all opposition parties behind it have been swallowed. Has the MDC-T been swallowed?

OG: Well, I have no mandate to speak for and on behalf of Brian Mteki. Suffice to state that the MDC-T is a separate and distinct political party from Zanu PF.

MDC-T is very ably led by a veteran politician and trade unionist, Dr Thokozani Khupe. We are not and we have never been a Zanu PF project.

Of course, our detractors have shamelessly and rather bizarrely labelled us a Zanu PF project, but then all these lame accusations are false, evil, malicious, grossly malevolent, capricious, frivolous and vexatious. It’s actually nonsense on steroids. Put bluntly, the MDC-T has not been swallowed by Zanu PF.

ND: In terms of numbers, the argument is the MDC Alliance has more people than the MDC-T and, therefore, Nelson Chamisa, having received two million plus votes is the right person to engage in dialogue with Mnangagwa, with some rendering your involvement as a party in dialogue as insignificant given the paltry numbers you scored during the elections. What is your take?

OG: That type of argument is utterly and totally puerile and absurd. Multi-party democracy is not only about size and numbers, it’s about ideas and policies.

That’s why even in well-established multi-party democracies such as in the United Kingdom, you have got smaller political parties compared to the two major parties, the Conservatives and Labour.

Are you, therefore, suggesting that when it comes to national dialogue in the United Kingdom, only the two big parties, the Conservatives and Labour should participate?

Such an argument is a negation of the very principle of multi-party democracy.

The MDC Alliance is a loose and unstable coalition between renegade mainstream MDC elements and the vanquished G40 faction of Zanu PF.

It’s an unstable and unhappy marriage of convenience that is rapidly collapsing like a deck of cards.
Come 2023, the ragtag coalition of renegade MDC elements and the vanquished G40 faction of Zanu PF will suffer a crushing and humiliating electoral defeat.

The tell-tale signs are already there if you consider the recent humiliating defeats that this crumbling coalition has been suffering in recent by-elections.

ND: It would now seem there is bad blood among people who used to work well together as a united MDC who, now don’t see eye-to-eye. What really happened to have this anger among former colleagues and can’t it be addressed to have an opposition that pushes in one way?

OG: Speaking entirely for myself, I have got neither anger nor malice towards my erstwhile colleagues.

We simply can’t work together with people who are violent, corrupt, unprincipled, treacherous and unpatriotic. That is not going to happen. Not in this life time or even in the afterlife.

Newer Post
All Is Fair in Love and War to People Who No Longer Feel Shame
Older Post
Mbeki meets ED, Chamisa