Polarisation in Parliament over the Current Economic and Security Situation

Source: Polarisation in Parliament over the Current Economic and Security Situation – The Zimbabwean

Both Houses of Parliament Have Adjourned to Tuesday 5th February 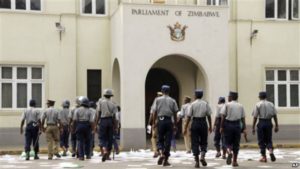 Polarisation in Parliament over the Current Economic and Security Situation

The economic and security situation was raised in the National Assembly on Tuesday 29th by MDC-A’s Hon Innocent Gonese.  It was raised again the next day in Question Time in the Assembly and yet again in the Senate’s Question Time on Thursday.

The contrast between the concerns raised by the MDC, which included reports of violence against opposition MPs, and the dismissive answers given by Government Ministers, indicates that there is serious polarisation in Parliament.  The MDC parliamentarians were concerned about victims of State violence and what the parliamentarians consider a breakdown of the rule of law;  the concern of the Government, on the other hand, was to emphasise that the Constitution is being followed and that the organisers of protests were responsible for the recent violence experienced in Zimbabwe.  The two sides were talking past each other, each ignoring the points raised by the other side.  It was a dialogue of the deaf, a discourse in two halves that ran in parallel without ever meeting.  This reflects the polarisation and parallel discourse in the nation.

In the National Assembly

He also took the opportunity to elaborate on the reasons for the recent lawyers’ protest march to the Constitutional Court to draw attention to violations of the rights of accused persons such as arrests without evidence, mass trial and denial of access to lawyers.

Mr. Speaker Sir, the Zimbabwean Constitution obliges Government of the Republic of Zimbabwe to respect the principles of the rule of law.  In light of the events that took place in our country with effect from the 12th January 2019, is it now Government policy that it allows gross attack and gross abuse of human rights that includes rape of women, denial of legal access to those that are in custody, mass trials, mass displacements, destruction of people’s homes, devious assaults on people and that includes the killings and murders of our citizens.  Is that now Government policy?

The Minister of Justice, Legal and Parliamentary Affairs began his answer as follows:

… Indeed the Government of Zimbabwe is committed to constitutionalism, the rule of law.

The Minister then went on to explain the Government’s concern about the behaviour of “so-called demonstrators”:

What is of concern to the Government is the attack on innocent people, attack on people’s businesses, attack on people who were going about doing their business when the so called protesters barricaded roads, prevented people from doing their day to day activities.  Our Constitution is very clear on freedom of movement, freedom of information and association.  All those freedoms are enshrined in our Constitution, but what we saw even on property rights when these demonstrations were happening, they went to the extent of attacking police officers in police stations and killing them. There is nowhere in the world where you will find a reasonable State standing aside when civilians are attacking and killing policemen.

Stopping well short of admitting illegal behaviour by police and military personnel, the Minister continued by asking for information to be provided to Government of incidents of misconduct so that they could be investigated:

So, this behaviour that happened when the so called demonstrators went into the streets was unbecoming and if there are incidences where the Hon. Member is aware of any of our law enforcement agents that went about doing the opposite of what they are constitutionally mandated to do, we are free to receive that.  Those incidences will be investigated.  That is the position and our position again is, if anyone is arrested, we have due processes of the law.  If you go to court and you have been tortured, you are given an opportunity to explain your case before the magistrate.  If you are denied legal representation, the Constitution is very clear. You present your case and if you are not satisfied with the ruling of the magistrate, we have review and appeal processes. So we have a whole range of checks and balances in our court processes. … I thank you Hon. Speaker.

Hon Biti returned to the charge:

Hon. Speaker Sir, the situation is very grave. Even our own Zimbabwe Human Rights Commission – Chapter 12, the Commission in terms of our Constitution has issued a report that said there was systematic and systemic gross abuse of human rights.  So, the question to the Hon. Minister is: is it now Government policy that the State itself becomes a rogue State?

The Speaker Mudenda then intervened to terminate the exchange on the ground that the Minister had already answered the question.

Questions from other MPs raised related matters, such as wholesale demolitions of illegal structures by the military, illegal undeclared curfews in high density areas, and the police spokesperson’s laughable attempt to brush off the incident illustrated in a Sky News film clip as dating from 2016.  To all these questions the answer was that Government is committed to constitutionalism and the rule of law and requires specific details of particular incidents to enable investigation.

Other matters raised during Question Time included a question seeking an explanation of Government policy on the use of school buses by political parties.  The Minister of Primary and Secondary Education replied:

I am happy that the Hon. Member has put it correctly that we have schools that are servicing the needs of our schools.  For this reason, the buses will continue to serve the purpose for which they have been bought.  Our line managers have not reported any cases of school buses being used for party business.  If such a situation arises, members are free to bring it to the attention of the Ministry.  I want to assure the members that our system will carry out an investigation on the matter.  However, individual schools are not prohibited from offering services to the community in which they are situated. Where such services are offered, members of the community pay reasonable amount of money.  The offer extends to the members of different denominations and some of the Hon. Members in this august House have benefitted from the offer.

In the House of Assembly on Tuesday 29th January the Minister of Justice, Legal and Parliamentary Affairs began the Second Reading stage of this Bill by delivering a lengthy Second Reading speech that took up most of the afternoon’s sitting.  The Minister’s Second Reading is usually followed by the presentation by the Portfolio Committee on Justice, Legal and Parliamentary Affairs’ report on the Bill.  Debate was adjourned after the Minister’s speech to allow that committee to hold its public hearings on the Bill.  Members’ contributions to the debate will come at a later stage.

On Wednesday 30th January the Senate considered and passed both the Finance (No. 3) Bill and the Appropriation (2019) Bill, as received from the National Assembly.  [Note: on the 20th December the National Assembly passed both Bills, after making amendments to the Bills as originally introduced.  The amendments were detailed in Bill Watch 1/2019 of 14th January [link] and have been incorporated in new versions of both Bills prepared by Parliament.  The new versions are now available on the Veritas website using the following links: Finance (No. 3) Bill [link] and Appropriation (2019) Bill [link].

During the clause-by-clause consideration of the Finance (No. 3) Bill in the Committee Stage, Opposition Senators took the Minister of Finance and Economic Development to task about his assurances that the Reserve Bank’s bond note and the US dollar are of equal value, when the reality is otherwise.  The Minister reiterated that Government policy is based on parity.

Opposition Senators did not, however, attempt to persuade the Senate as a whole to exercise its right to send the Bill back to the National Assembly with recommendations for amendments [that right was discussed in Bill Watch 3/2019, Finance Bill: When Does it Come into Force? Can the Senate amend it? [link]

The Bills can now go to President

The Senate’s passage of the Bills without amendments permits Parliament to send both Bills to the President for his assent and signature, after which they will be gazetted as Acts and come into legal effect.  Reasonably prompt gazetting of the two Acts can be expected in view of their importance and urgency.

SI 13/2019 – Labour (Limit on Continuous Renewal of Fixed Term Contracts in the Electricity and Energy Supply Industry) Regulations, 2019.  These regulations, made by the Minister of Public Service, Labour and Social Welfare, intervene on a topic that for many other industries has been covered by collective bargaining agreements – presumably because the parties to the national employment council for the power industry have not yet done this. The regulations provide that contracts of fixed duration shall be deemed to be a contract without limit of time upon the expiry of a continuous period of service of five years.  The SI allows the parties to the NEC to amend this provision – but only by agreement and with the approval of the Minister.

SI 14/2019 – Collective bargaining agreement – Printing, Packaging and Newspaper Industry.  The SI sets out important amendments to the main agreement for the industry, affecting fixed term contracts, limiting use of cellphones in the workplace, supervisors’ remuneration, employers’ use of non-artisans in designated trades, shift-work, leave, annual leave, acting allowances, transfers, pension fund, freedom of conscience for employees, and gratuities on termination of service.

GN 104/2019 – a notice from the Special Economic Zones Authority notifying an adjustment to the area of a special economic zone declared on 31st August 2018.