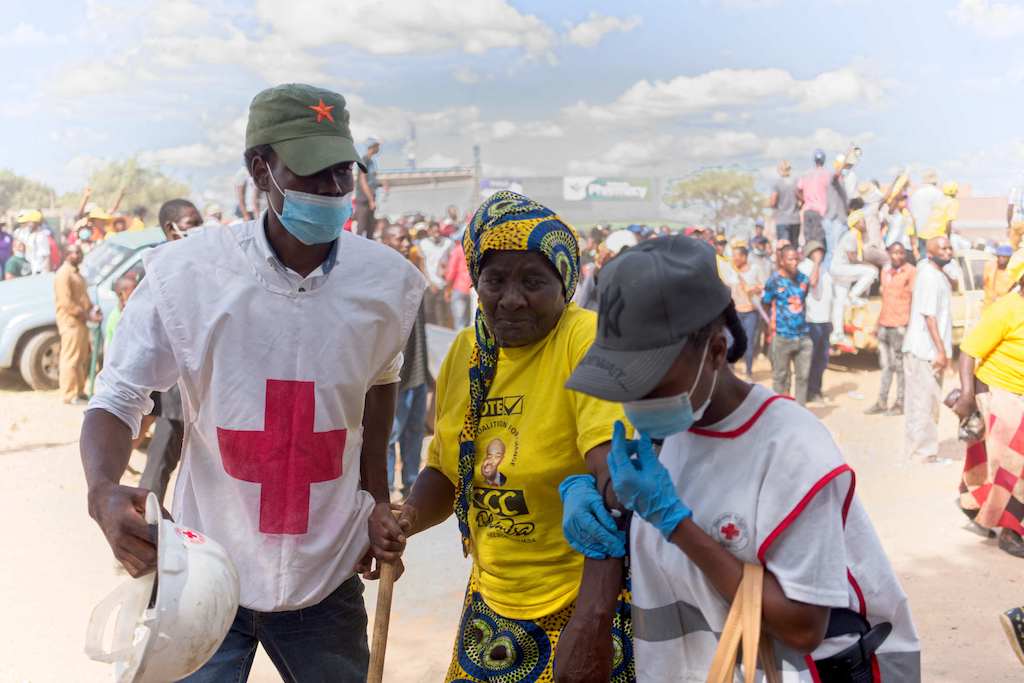 A supporter of Citizens Coalition for Change is helped by Red Cross aides following a stampede at Mbizo shopping centre in Kwekwe. AFP/Zinyange Auntony

HARARE – Zimbabwe police have blamed the ruling ZANU-PF party after unrest at an opposition rally left one person dead and 22 more injured.

A police memo obtained by AFP said that members of the ruling party had dressed in the yellow regalia of the opposition Citizens Coalition for Change (CCC), ahead of the rally on Sunday in the central town of Kwekwe.

They then ambushed a group of actual opposition activists, stabbing one to death by striking him three times in the back with a metal rod, according to the memo.

Sixteen people have been arrested over the violence.

“Towards the end of Nelson Chamisa’s address, suspected ZANU-PF youths intercepted people in CCC t-shirts who were walking to the rally and threw stones on them,” the memo said.

“The skirmishes about 400 metres from the venue resulted in the deceased being stabbed thrice with a sharp object on the back and died whilst admitted at Kwekwe General Hospital,” the police memo added.

The violence forced CCC leader Chamisa to cut short his speech at the rally, which was staged to build up support for his party ahead of by-elections in March.

Chamisa is the leading rival to President Emmerson Mnangagwa, whose ZANU-PF party has ruled since independence in 1980.

EU Ambassador Timo Olkkonen described Sunday’s events as “a heinous act of political violence which has to be condemned.”

“Those responsible need to be brought to justice and a level playing field for campaigning guaranteed.”

“We are vindicated. Police are doing a tremendous job in arresting culprits over Kwekwe violence. I hope that all those who incited violence through their recorded utterances calling for youths to revenge are brought to book as well,” he wrote on Twitter.

On Saturday police had already violently dispersed hundreds of opposition supporters in Gokwe, some 140km from Kwekwe, claiming they were understaffed to properly police the rally.

Newer Post
Hearing Date for Challenge to Amendment of Constitution
Older Post
Even under ZANU PF urban local authorities boreholes will be the order of the day in our towns and cities!