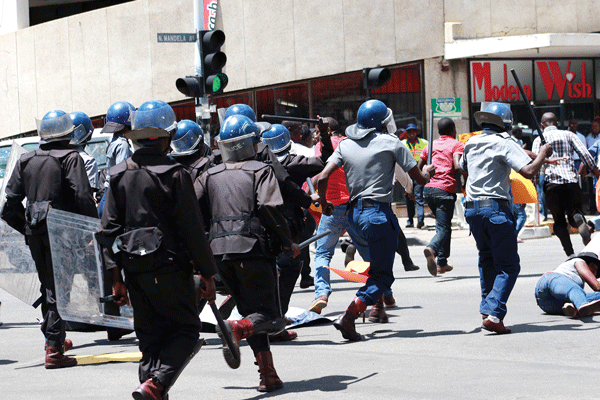 BY METHEMBE SIBANDA
POLICE yesterday denied charges of brutalising protesting teachers after the 16 educators who were arrested in the capital last week raised abuse and torture allegations.

The 16 Amalgamated Rural Teachers Union of Zimbabwe (Artuz) members were arrested after protesting in Harare demanding United States-dollar salaries. They were released on Monday on $5 000 bail each.

The Artuz members, including their leader Obert Masaraure, said they were repeatedly assaulted in an “inhumane” manner by the police before they were taken to Harare Central Police Station.

“This peaceful environment (during protest) was, however, rudely disrupted by the arrival of two police vehicles — a truck carrying up to 100 anti-riot police officers and a smaller truck with 20 more. As they jumped from the truck, the threat of violence was very apparent. We all scattered in different directions for safety,” Masaraure said in a statement.

He said they sought refuge at the nearest police, where they suffered more police brutality.

“As we approached the police post, we heard the blood-chilling sound of a gun being cocked. We turned around and we saw a police officer in uniform. He instructed us to lie on the ground.

“We lied on our bellies and he used the radio to signal more police officers to come. Within minutes, we were tied together with a rope. They proceeded to assault us with truncheons.

“We remained on our bellies enduring each stroke as it came. The beatings got worse as they kicked us all over our bodies, including our faces,” he said.

“After 20 minutes of unrelenting assault, we were ordered to get up. We were ordered to run around the park. Our bodies were on fire from the beatings, but in the face of armed police, we had no choice but to push ourselves to run.”

National police spokesperson Assistant Commissioner Paul Nyathi said he was not aware of the alleged torture.

Police have often been accused of gross human rights violations