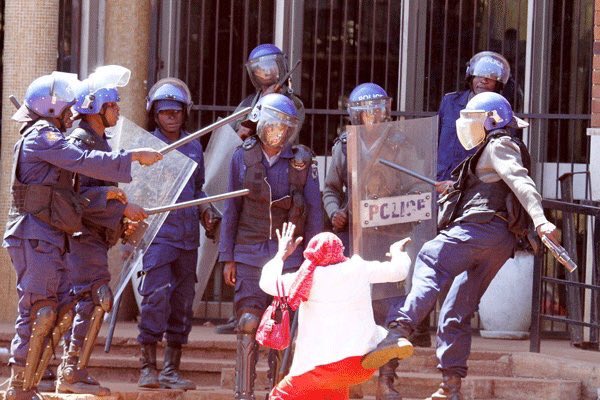 A HIGH Court judge yesterday ordered the Zimbabwe Republic Police and Home Affairs and Cultural Heritage minister Cain Mathema to pay $13 500 to 64-year-old Lillian Chinyerere, who was assaulted by the police at the Harare Magistrates’ Courts during an anti-government protest in 2016.

Chinyerere’s photographs while being kicked by armed riot police officers made international headlines and reinforced Zimbabwe’s image as a pariah State.

In the pictures, which were exclusively captured by NewsDay, Chinyerere was pleading with riot police officers to allow her entry into the court building, where #ThisFlag founder Evan Mawarire was appearing, facing treason charges after leading a massive anti-government protest.

Another $5 000 was for damages to her indignity, $2 500 being special damages for loss of income and $1 000 for past and future medical expenses.

Kudzai Kadzere and David Hofisi from the Zimbabwe Lawyers for Human Rights, who represented Chinyerere, had submitted that their client suffers from high blood pressure and diabetes.

She had also suffered the ignominy of a brutal assault on her ageing body in full view of the public.

ZRP lawyers from the Civil Division of the Attorney-General’s Office unsuccessfully denied the allegations levelled against the police, saying Chinyerere had made assault allegations in a bid to tarnish the image of the force.