Platform for Youth Development Trust (PYD) is shocked and traumatized by the levels of mistrust, hate and gross partisanship taking place in Manicaland at a time that unity and compassion is needed the most to insulate the devastating effects of Cyclone Idai. 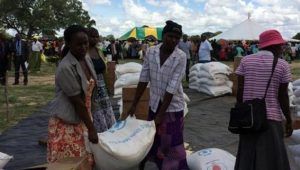 The social and mainstream media has been inundated and awash with pictures and videos of distressed calls from Cyclone Idai victims requesting for help and relief, especially in the ravaged areas of Chimanimani and Chipinge districts. Zimbabwe experienced torrential rainfall caused by Cyclone Idai from the 15th to 17th of March 2019 which caused high winds and heavy precipitation in Chimanimani and Chipinge.  The majorities of the affected families in these districts survive on subsistence farming and have little or no alternative source of income. The cyclone Idai has worsened the dire food situation.

PYD has been part of the various civic society organizations and local community stakeholders who have been sharing information for the public and well-wishers to understand the gravity of the damage so as to provide basic relief and intervention. Whilst the humanitarian response from the local, national and international level has been overwhelming and touching, this is being soiled by heartless political vultures that are bending on wanting to score political value and mileage over a natural disaster such as Cyclone Idai.

PYD Director, Mr Claris Madhuku expressed dismay at some of the events that are already taking place in Chimanimani and Chipinge

“I have witnessed political jostling of men and women, some in their political party regalia wanting to control the food relief by using their partisan emotions and discretion. This is inhumane and must be condemned for shaming the morality of the nation” Madhuku fumed

Although the Minister of Media, Information and Broadcasting Services who is also Senator for Chimanimani Monica Mutsvangwa has refuted the allegations that there were Zanu PF structures, including former trainees of the Border Gezi who have denied food aid to victims purported to be supporting the opposition, evidence is overwhelming.

PYD has observed that the issue of food aid and relief in rural communities has been at the Centre of local politics in rural Zimbabwe. Food aid has always been used as a weapon of influence and patronage rather than broader social justice and empowerment objectives. As community-based organization, PYD is fully aware that this practice will have negative effects on community development which is likely to result in increased vulnerability and the deepening of social insecurity to the victims of Cyclone Idai. Divisive politics during this disaster period must be discouraged because it makes communities vulnerable and deprived from genuine livelihood support by government.

Platform for Youth Development has also observed that the politicization of food relief is negatively affecting women and children in Chimanimani and Chipinge. Cynthia Gwenzi who is the Gender and Wellness Officer for PYD noted that

“When partisanship is used on food relief, it is the women and children who are disadvantaged the most because they will have no one to represent them without being exposed to the vulnerabilities of patronage and abuse. In most cases, partisanship leads to physical force which then discriminates women and children” Cynthia Gwenzi suggested

Cyclone Idai has affected Chimanimani and Chipinge districts the most by disrupting water and sanitation facilities, damaging road networks, cutting power supply and displacing people including loss of life. According to the Inter-Agency Rapid Assessment/Appraisal Update on Cyclone Idai disaster, 29 000 households were affected in Chimanimani and 21 000 households in Chipinge. At the same time, 8000 people were displaced in Chimanimani whereas 3000 were also displaced in Chipinge. The Cyclone Idai has inflicted damage to 37% (121 000) of the Chipinge rural population which are now in urgent need of food assistance with a total of 77% (114 000) also requiring food assistance in Chimanimani. The statistics from the inter agency rapid assessment update pose a grim picture as the source of livelihoods were wiped out as indicated by 24000 hectares of dry land that have been destroyed in Chipinge and 300 hectares in Chimanimani also facing the same fate. The death toll for Manicaland Province stands at 259 with over 300 people still missing.

PYD has always raised this issue of partisan food distribution due to the fact that the victims are in dire need of emergency relief to the counter debilitating effects of cyclone Idai. To curb against this embarrassing situation, all political party structures must be removed from the food distribution process in favor of professional persons who are linked to those donating the aid.