Source: Pool of death now source of livelihood | The Herald

EPWORTH’s infamous pool of death is always humming. The level of activity that greets one upon arriving at the place is both exciting and worrying.

It is a place over which numerous tales have been told, describing it as a pit of tragedy, wearing an unfamiliar face.

This week, children were sprinting in and out of what used to be the pool of death, with water buckets on their heads.

The depths they were treading, were, a few years ago, a preserve of those seeking to escape the world in a violent manner.

As water levels in the disused quarry crater drop, the smell of death is waning.

It has become a communal source of water and livelihood for people in Overspill, a haphazard section of Epworth.

Without council water, they rely on wells, which run dry in winte,r leaving them in a predicament.

The pool has brought reprieve even to those who once dreaded it.

Daniel Mukombachoto, who had just arrived on a bicycle with a 20 litre container said the receding pool was a blessing to them. 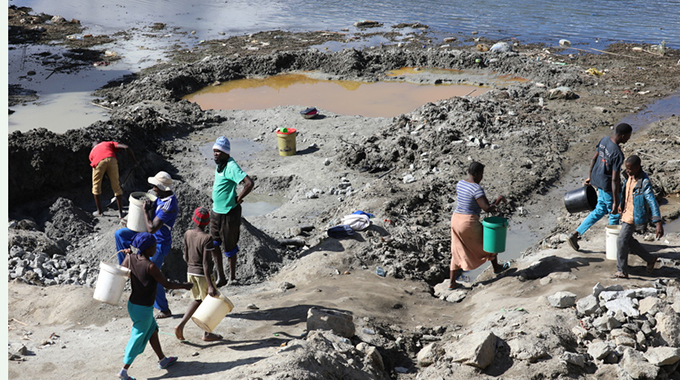 “Our wells dried a long time ago — around April. We have been getting water from here.

“We don’t drink it, but it is the reason why we are able to bath, do our dishes and wash our clothes,” he mused.

Overlooking the pool are cabins in Jacha and Solani sections of Overspill.

They do not have domestic water save for shallow wells, which run dry this time of the year.

So dire is the water situation that they are contemplating drinking the pool water which is known to be contaminated.

“We are made to pay ZW$50 cash to access wells with drinkable water. You can only fetch one bucket a day. I am prepared to start drinking water from the pool if the charge increases,” Mukombachoto said.

Coincidentally, less than 100 metres from the pool is a water pipe, which carries potable water to suburbs like Hatfield and Msasa Park.

Those who do not have cash to pay to access wells are taking their chances with the few points from which the pipe leaks.

There are competing uses, others use the same water for ‘commercial’ and domestic purposes.

There are brick moulders and carwashes that rely on the same water source.

The pool edge, which was in the past the safest one could be from the former abyss of death, is now dominated by women and children washing clothes.

Between them and the water are toiling men seeking to earn their next dollar from the residue of what saw the creation of the large pit in the first place — quarry dust.

The water level, which is at the lowest it has been in years revealed quarry deposits.

Youths like Malvern Mara have found a new vocation.

“I used to spend time here as part of the rescue team. Our main role was to rescue those who would have fallen into the pool.

“Now that the water level is low, we spend time digging and collecting quarry dust,” he said.

The digging has seen the emergence of smaller pits within the pool.

One wheelbarrow of quarry dust sells for US$1.

With construction work in Epworth and surrounding areas, they seem to have struck gold.

“Not all days are the same, sometimes you do not sell anything. Some days you sell more than 20 wheelbarrows, it is a gamble,” said Mara.

Despite the pool being a place with various gory stories for Epworth people, one cannot wake up digging for the quarry dust.

Mara and his colleague who identified himself as Tendai Phiri are the self-proclaimed custodians.

“For one to come and work here, they need to work under us for a while.

“If they are good, we release them to work on their own,” Phiri said.

The place resembles an anthill, with relentless activity.

It is morphing into a hub of sorts.

“My brother, you will never ride in some of the cars we wash here. We attract nice cars because of our speed and thoroughness,” explained one Terrygunz who washes cars by the pool.

A number of vehicles — although far from his exaggeration — sought the car washing service during The Herald crew’s visit.

Over the years, a theory has been advanced that the mysterious deaths at the pool are a result of mermaid spirits.

Those who have established “offices” there appear unperturbed.

“Issues of mermaids have been there since I was born in 1987. I do not buy them. Everyone who is here would not be here if it was true,” Terrygunz said.

Just four years ago, a man called Victor Kazembe was nicknamed Rambo for cycling into the pool of death and swimming with the bike in tow.

Exhibiting spectacular bravado, he said the act pumps up his adrenaline.

Today, no one would be given even a nod for cycling into the pool as it is slowly becoming a dry gorge.

Writers may need to search for new phrases to describe it as “pool of death,” is no longer apt.

On a busy day, the pool attracts hundreds of people.

It is now hard to believe that the place that over the years swallowed many lives is now a source of sustenance.

Newer Post
Epidemics reveal underlying societal tensions. That was the case in Zimbabwe’s cholera outbreak, too
Older Post
Lessons from our Past