Samuel Kadungure in NYANGA
PRESIDENT Mnangagwa yesterday had a hectic programme here during which he commissioned Nyakomba Irrigation Scheme in the morning before addressing a rally at Bumhira Secondary School in the afternoon.

The project started in 2015 and was funded to the tune of US$15 million under the Japanese Grant Aid.

The Department of Irrigation under the Ministry of Lands, Agriculture, Water and Rural Resettlement and the Japan International Cooperation Agency (JICA) were involved in the rehabilitation and development of the facility.

New canal structures were built, while existing ones were modified.

An overnight storage pond was built, while pumps and flood protection structures for Blocks B, C and D pump stations that were damaged by floods in 2006 were repaired.

New irrigation infrastructure was installed on Block A, which has 146ha.

President Mnangagwa said Nyakomba was one of the most critical irrigation schemes in the country whose modernisation would increase productivity.

“We came here at the invitation of members of Nyakomba Irrigation Scheme. Lands, Agriculture, Water and Rural Resettlement Minister Perrance Shiri once invited us, but we could not make it because of other commitments but this time we have managed,” said the President while addressing a rally at Bumhira Secondary School.

He said he had visited Nyakomba specifically to see their work that was targeted at sustaining livelihoods.

“When we toured the project, we saw men and women working on their pieces of land. The project is targeting export markets, so I had to see where they produce and process (red) chilli. They export it to America, where they are paid in US dollars,” he explained.

The President said the farmers had told him that they earn in excess of US$1 000 from produce grown on their 2-hectare pieces of land but they also produce other crops such as maize and cotton under irrigation.

Government, the President said, would in the next three years, prioritise the construction of dams and drilling of boreholes with a view to putting 100 000 hectares under irrigation.

This initiative will be implemented in all districts countrywide.

Meanwhile, President Mnangagwa took the war on coronavirus to Nyanga, where he said the ban on large gatherings would take effect tomorrow. 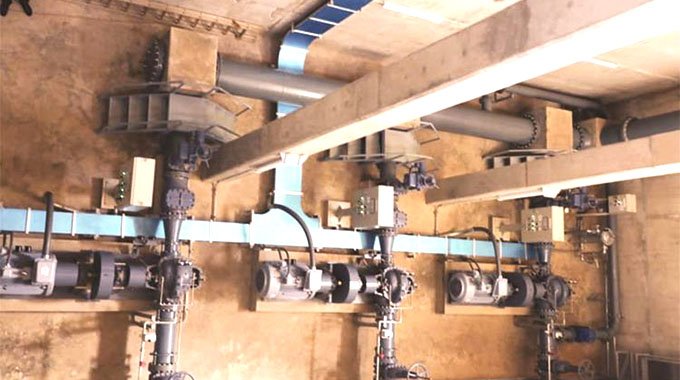 “There is an outbreak of the coronavirus disease worldwide, which has seen only a few countries from the African continent remain unaffected. Thousands of people have died, while many others are sick so we have taken measures as a country so that if we record a positive case we will be ready to deal with it. We thank our God that we have not recorded any case of the virus up to now. We were supposed to host the Zimbabwe International Trade Fair in April but this disease does not want people to congregate because if one of them is infected, he or she can pass it on to all those that he or she comes into contact with,” he said.

And since ZITF attracts a lot of people, which increases the chances of the disease spreading, Government has seen it fit to move it to a later date other than in April so it will be hosted once the disease is confirmed over, said the President.

He also added that the independence celebrations that had been slated for Bulawayo had been shelved.

President Mnangagwa said he had deliberately set March 20 as the date on which his directive for people to avoid gatherings in excess of 100 would come into effect because of yesterday’s event.

“The ban will come into force on Friday (tomorrow) so people can still congregate up to Thursday (today) and not breach the ban hence you have the permission to gather as you have done here today,” said the President.

He took the opportunity to advise people that schools would remain open till the end of the term.

He said Government would also distribute the new batch of Zupco buses to provinces to ease transport problems in rural areas.

President Mnangagwa promised to repair all damaged roads and bridges in Chimanimani and Nyanga districts, adding that 33 new buses would be given to civil servants.

The President also warned party supporters against the imposition of candidates during the ongoing restructuring exercise.

“Don’t let your leaders impose someone on you, refuse that. As you elect councillors for the next elections, elect people who work diligently. This also applies to selection of MPs, choose them wisely,” he warned.