Justice Zimba-Dube, who has sat as a judge of the High Court for 10 years, fills the vacancy created by the promotion to the Supreme Court of the immediate past Judge President, Justice George Chiweshe.

She is the second woman to occupy the top High Court office after Justice Rita Makarau, who was first promoted to the Supreme Court and then, in May this year, was one of the first five judges appointed to the Constitutional Court.

Mrs Fortune Chimbaru was the Director Civil Division of the Attorney General’s office before her promotion.

Justice Zimba-Dube will be sworn-in as the Judge President tomorrow, according to the Judicial Service Commission secretary Mr Walter Chikwana.

“I can confirm that Justice Zimba-Dube will be sworn in as the JP (Judge President) by the Chief Justice Luke Malaba at the Constitutional Court on Tuesday,” he said.

“By virtue of being the Judge President, she becomes a commissioner of the JSC. This means she will take two oaths, one as the JP and the other as the Commissioner of JSC in terms of the Constitution.”

A veteran lawyer and a judge of the High Court, Justice Zimba-Dube was appointed to the High Court bench in 2011 after serving as president of the Administrative Court since 2004.

On June 29 this year, Justice Zimba-Dube was appointed Acting Judge President when Justice Chiweshe moved up to the Supreme Court to fill one of the vacancies created when the Constitutional and Supreme Courts were split.

Mrs Chimbaru (51) joined the Justice Ministry in March 1994 as a public prosecutor after leaving the University of Zimbabwe.

She prosecuted in different courts until 2008 when she joined the civil division of the Attorney General’s Office as a chief law officer, becoming the director in 2013.

Yesterday, Mrs Chimbaru welcomed her promotion saying it was a great honour for her to be appointed to this important office of Deputy Attorney General. 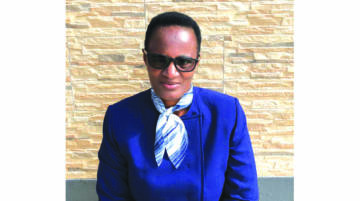 “I am grateful to His Excellency the President Cde ED Mnangagwa for entrusting me to such a noble office,” she said.

“The office of Attorney General is mandated to perform the legal functions in relation to Government as provided in the Constitution and I promise to do my best in the execution of my duties. I am extremely grateful to the Attorney General, Advocate Machaya, for his mentorship and the entire Ministry of Justice team for the team work that has manifested into this great moment.

“I remain a committed team player as we work towards attaining our vision to deliver access to justice for all by 2030.”

Female lawyers hailed President Mnangagwa for being sensitive to gender balance by continuing to appoint women to top judicial offices.

Lawyer Advocate Choice Damiso said: “It is tempting to always want to comment about the appointment of women from a perspective of gender balance and women’s empowerment but when we do that it tends to detract from the merit of the appointees.

“In the case of these two appointments, each one is a seasoned and well respected professional. The fact that they also happen to be women is a plus.”

Adv Damiso said such appointments give young female lawyers great role models to look up to and emulate.

Another lawyer, Mrs Dorcas Atukwa of Atukwa Attorneys, said the appointment of Justice Zimba-Dube and Mrs Chimbaru to the key posts represents an important step towards achievement of gender equality and parity in public appointments as required by the Constitution.

It is a progressive step which we hope that together with meritocracy, will be the standard of appointments in every sphere. You will note that Justice Dube is the second woman to be appointed as Judge President. We applaud the appointment but still think that more can be done and that more women are going to be found in top positions,” said Mrs Atukwa.