PRESIDENT Mnangagwa has warned industrialists against wanton price increases, indicating that his Government is currently drafting a raft of measures that will promote the use of the local currency over the US dollar.

Addressing thousands of Zanu PF supporters in Muzvezve constituency yesterday, President Mnangagwa said the country’s currency has been under sustained attacks from Western countries since they imposed sanctions on Zimbabwe at the turn of the millennium, a situation that led to the adoption of multiple currencies after the Zimbabwe dollar had lost value.

Rent-seeking behaviour among businesses and market speculation has had the resultant effect of pushing prices up, well above the means of the majority.

However, with a new world order emerging in the wake of the Russia-Ukraine conflict that could result in the international adoption of another currency besides the greenback, this is a promising prospect for countries like Zimbabwe which have been at the mercy of powerful Western nations and manipulative businesses. 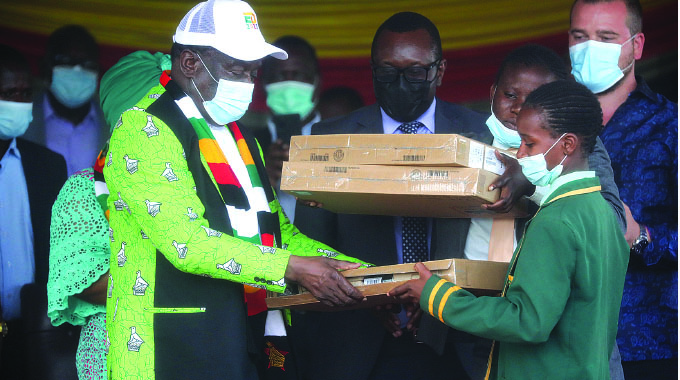 Buoyed by developments in international markets, President Mnangagwa said Zimbabwe is now set to use it’s local currency as the major medium of trade.

“On the issue of price increases, we used to have our own dollar. When we were sanctioned, our country’s currency was attacked by Western countries who have powers in terms of controlling money.

“The money lost it’s value and we adopted the US dollar which we have since left behind. Now they (the Western world) have met their match in (Russian President Vladimir) Putin who is demanding payments for gas and oil in (the Russian currency) roubles instead of the US dollar that has governed global trade for the past 60 years,” he said.

“Russia is a big country whose economy affects the world economy, there is now a new world order that includes Russia and China.”

Zimbabwe, President Mnangagwa said, will soon make it mandatory for businesses to trade in local currency as opposed to the US dollar.

“We are saying to our industrialists such as Innscor, that any investor who comes into the country should buy whatever he wants in Zimbabwe dollars.

“We are putting measures to make sure that we deal once and for all with companies that are manipulating the local currency.

“We also have locals who are indiscriminately raising prices, punishing the people but we are going to put measures that will ensure that our currency will be sought after and that the US dollar doesn’t dominate.”

The President, who was accompanied by his deputy Vice President Constantino Chiwenga, Cabinet Ministers and senior Government officials, said food security is key to peace and security, hence his Government came up with policies to climate-proof Agriculture so as to ensure bountiful harvests regardless of changing rainfall patterns caused by climate change.

Speaking to communities around Rio-Zim in Kadoma,

President Mnangagwa said his Government has heard their concerns and has engaged the mining giant to take measures that will improve the lives and livelihoods of communities affected by their activities.

“We heard your concerns that there is blasting that is disturbing the people around the mine, and that some houses have since developed cracks.

“I asked the mine owners why they are employing people from outside, and I ordered them to make sure that any job that arises from now onwards should benefit the people here. I also told them to have a meeting with the leadership and engage them.

“The Zanu PF leadership should lay out their demands and those challenges should be addressed.

“I told them to build new homes for the affected families, especially for those close to areas where blasting is taking place. They also promised to drill boreholes and ensure that every family has access to water.

“I will be coming back here twice a year to monitor what they are doing. We want development but that development should not adversely affect communities,” he said.

With today being Good Friday, President Mnangagwa called for safety on the roads, peace and the observance of Covid-19 protocols notwithstanding the lifting of a ban on public gatherings.