‘Presidential inputs should benefit all’ 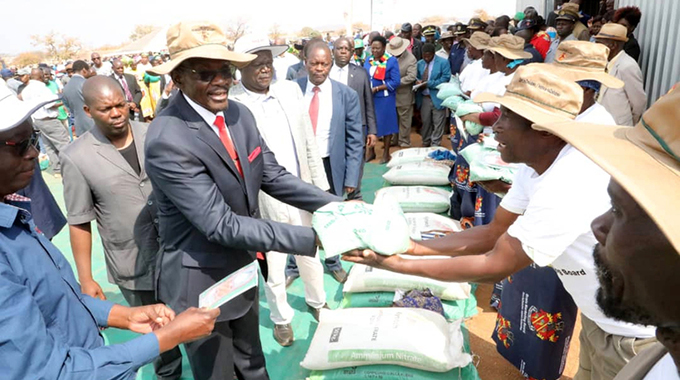 Source: ‘Presidential inputs should benefit all’ | The Herald September 22, 2018

Thupeyo Muleya Beitbridge Bureau
Acting President Kembo Mohadi has said the Presidential Inputs Support Scheme should benefit all small-scale farmers countrywide regardless of their political affiliation to ensure national food security. He said traditional leaders should encourage communities to take up Government programmes, which seek to uplift their way of life.

The Acting President was addressing scores of people at Lutumba Business Centre in Beitbridge East Constituency during the launch of the small grains programme, which falls under the Presidential Inputs Support Scheme.

Thirty tonnes of Compound D, 20 tonnes of top dressing fertiliser, 5 tonnes of millet, 5 tonnes of sorghum and 600 packets of vergi seeds were distributed to 600 households during the launch yesterday.

“The programme we are launching here today is meant to benefit all Zimbabweans in our diversity. Though we might differ politically, let’s embrace each other on national and serious productive issues,” he said.

“The launch of the small grains programme we are gathered to witness derives importance from the urgent realisation for change in our perceptions and attitude towards the farming of small grains.

“Ironically, the ultimate goal of farming and I quote ‘is not the growing of crops, but the cultivation and perfection of the human mind’. This is a starting point for success in agriculture.

“As long as our mindset cannot accept change concerning farming practices, it will be difficult for us to move forward. Agriculture demands of us greater knowledge as the saying goes, ‘nobody is qualified to become a statesman who is entirely ignorant of the problem of food’.”

The Acting President said efforts at national level to grow small grains were in tandem with initiatives by the Institute of Crop Semi-Arid Tropics (ICRISAT) such as sorghum and pearl millet technology (SMIP).

The small grains initiative, he said, would benefit over 1,8 million people countrywide, with them (beneficiaries) receiving maize, millet, vegetable and sorghum seed and fertilisers.

“We have budgeted enough to ensure that the programme becomes a huge success. Turning to the Presidential Inputs and Support Scheme, I am reliably informed that this year the country is better prepared in comparison to the previous farming seasons. Relatedly, I am also informed that the package (for beneficiaries) has improved significantly in line with nutrition challenges of the country and observations by the Zimbabwe Vulnerable Assessment Committee,” said Acting President Mohadi.

“This cropping season inputs are therefore distributed according to specific regions suitable for a crop. The ‘bambazonke’ kind of approach has failed us,” said Cde Mohadi.

He said development agents and political leaders should also consult with traditional before rolling out their programmes.

He said traditional leaders were the custodians of the people, which made them critical players in all developmental programmes.

“It is also important that we carry out further research that generates knowledge to mitigate the punishing ravages of the changing climate and past mistakes. Current wisdom points to the production of small grains as a proven way for the survival of our agricultural sector,” said the Acting President.

“As we cast our eyes deeper into the future, it is Government’s belief that our best thoughts should be concentrated where the greatest challenges lie. Let me take this opportunity to challenge our researchers and scholars to channel their thoughts at discovering solutions to the challenges that we have to contend with in an increasingly changing environment.”

He said more resources were being channeled to the construction of more water bodies and irrigation systems in areas where cropping was not doing well under rain-fed agriculture.