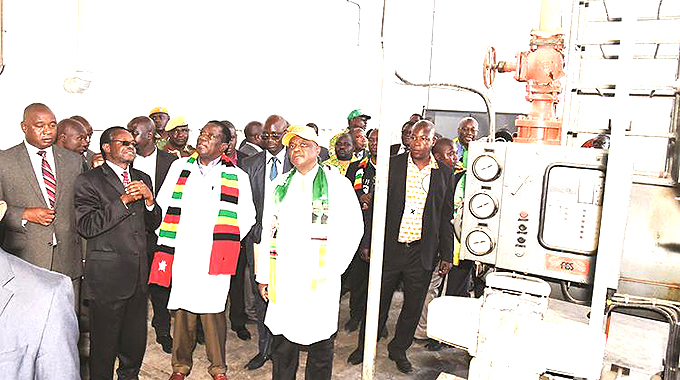 President Mnangagwa, while touring Masvingo CSC, which will be the epicentre of the revival of the company said his Government has been putting the economy first since the arrival of the new dispensation

President Emmerson Mnangagwa’s interventions are practical and promoting economic growth by opening up of industries and partnerships with the foreign companies.

Progress can now be discerned in the country’s economy which had been stagnant for a very long time.

Ever since the advent of the new dispensation in November 2017, President Mnangagwa has shown unmatched determination to initiate practical economic interventions.

These are targeted at redirecting the country’s policy towards economic development to make Zimbabwe a middle class nation not later than 2030.

With this in mind, President Mnangagwa has been opening up the country’s industries and mines.

The new Government brought with it a new approach to matters of improving people’s livelihoods and nation building.

A fortnight ago, while touring Masvingo CSC, which will be the epicentre of the revival of the company, President put his policy into perspective.

He said: “Since the coming in of the new Government, we said economy first, business first and jobs first.

“There is the Cold Storage Commission that used to employ many people, almost 500 here in Masvingo alone. On Tuesday, we are signing an agreement with an investor that we met when I went to Davos (Switzerland).

“We met an investor whom we presented opportunities available in the country and they took our issue into consideration.

“So next week on Tuesday, they will be giving us the money to revive the Cold Storage Company so that it gets back to full operations. We had a tour of the company where senior managers there told us that they have already started preparing for the resumption of operations.

“Employees have already been recruited and we hope that on July 31, a day after voting in national elections, we should see the opening of CSC Masvingo.

“We are saying, let us concentrate on issues that uplift the economy of the country and create jobs.”

CSC Masvingo is the biggest abattoir in the country and at its peak employed over 6 000 workers.

Work at Mashaba Asbestos Mine had been stalled by the water table, which had made it difficult for miners to extract the mineral resource from waterlogged shafts. Following Government intervention earlier this year, the mine recently started the de-watering process.

After completion of this process before year end, at full operation, the mine should employ more than 1 400 miners and contribute to the nation’s economic development as well as that of Masvingo Province.

Masvingo CSC had been lying idle for some time.

The new Government initiated the recapitalisation of the sleeping giant and the National Social Security Authority (NSSA) indicated that it would furnish the company with up to $14 million, which should see the CSC returning to full productivity.

The move by the new Government goes a long way in promoting beef farmers and reclaiming the country’s foreign beef market as the country was well-known abroad for its natural organic beef.

Such a development boosts animal husbandry, which should see the country increasing its beef exports and foreign currency earnings.

King Mine and Shabanie mines, which fall under Shabanie and Mashaba Mines (Private) Limited, were closed at the height of economic meltdown in 2004.

In his address, the President said by June next year, King Mine and Shabanie Mine would be fully operational, with some workers having already been hired.

He said once the two companies were fully operational, at least 6 000 direct jobs would be created with the downstream industries also set to benefit.

“We have come here at the behest of the commissariat (of Zanu-PF), but before coming here, we toured Mashava, at King Mine. As we all know, King Mine and Shabanie Mine in Zvishavane were closed long back.

“I sat down with my Cabinet and agreed to resuscitate the two companies. The management said they wanted $35 million and we have already disbursed $20 million. Both companies will be fully operational by June next year,” he said.

On the other hand, the construction of Tugwi-Mukosi Dam brought with it many economic developments for Masvingo Province.

The water capacity of the dam should irrigate 250 000 hectares of land, a major boost for the agricultural sector given the effects of climate change on farming.

A $20 million hydro-power electricity project facilitated by Government will contribute 15 megawatts of electricity to the national grid, easing the country’s power outages.

The dam will also promote tourism activities and Command Fisheries, which the new Government recently launched.

Thousands of families are set to benefit directly and indirectly from activities centred on Tugwi-Mukosi Dam as the new Government works to improve people’s livelihoods at grassroots level.

The future looks bright under the President Mnangagwa’s administration.