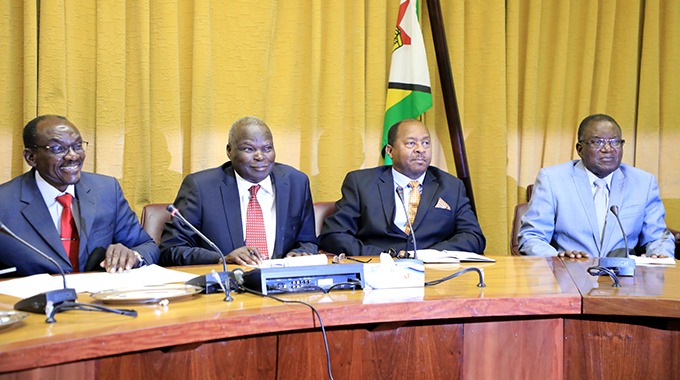 Further, the Government directed that no businesses should reject bond notes and other electronic payments when transacting.

With regards to the proposed two cents tax per dollar, the Government said there was no need for the public to panic as this was yet to be implemented and still being fine-tuned.

Those who defy these directives will face drastic action and with regards to those in the fuel sector, they risk revocation of their licences.

Announcing the Government position after yesterday’s Cabinet meeting at Munhumutapa Government Offices, Vice President Kembo Mohadi — who was flanked by Acting Minister of Information, Publicity and Broadcasting Services July Moyo and his Acting Industry counterpart Prisca Mupfumira — assured the nation that Zimbabwe had sufficient fuel, while swift measures were being implemented to ensure adequate foreign currency to procure drugs for the health sector. 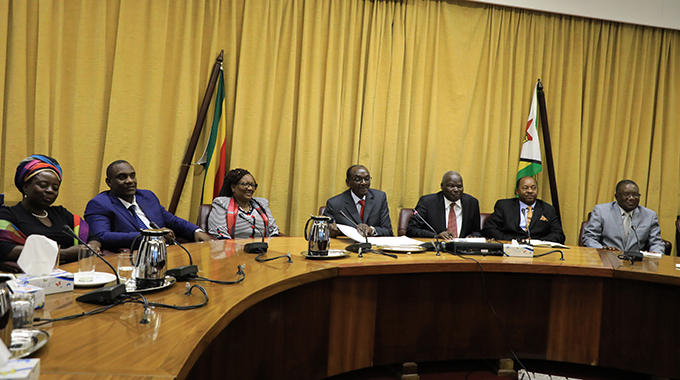 With regards to bread, VP Mohadi said a consignment of wheat imported on October 8 was on its way to avert any possible shortage.

“Regarding basic commodity prices, we applaud shops like OK and Pick n Pay who have maintained the usual selling prices,” said VP Mohadi.

“However, it has been noted with concern that there are some supermarkets and individuals that have started selling commodities at exorbitant prices.

“Government will take stern measures against those who continue to engage in such malpractices, who are bent on inflicting suffering on our people. Where there are genuine shortages, Government is going to provide critical foreign currency support to the concerned manufacturers under a synchronised programme to cover the supply gap through imports while at the same time boosting local production capacity.”

On fuel, VP Mohadi said: “The fuel stock in the country is still adequate as reported last week. Fuel companies have adequate stocks to satisfy the needs of the country and at prices agreed by to by ZERA are still operational. These are in the range of $1,31 (diesel) and $1,41 (petrol).

“Anyone pricing these above regulated fuel prices is doing so illegally. Price monitors are on the ground monitoring the situation. All those caught selling fuel at prices not approved by ZERA and those service stations either demanding payment in hard currency or engaging in other untoward trading practices will have their licences revoked.”

VP Mohadi said Cabinet also dealt with the issue of drug shortages and Government was concerned with the challenges facing the pharmaceutical sector where drug prices were also rising sharply.

“Steps are being taken to ensure the availability of foreign currency to the sector,” said VP Mohadi. “Government is in discussion with pharmaceutical companies on an appropriate solution to the situation, bearing in mind the need to safeguard the health of the citizens.

“Failure to comply with this, the (responsible) Minister has been directed to take drastic measures.”
With regards to bread, VP Mohadi said: “The nation is assured that there should be no panic with regards to bread shortages as there is wheat coming in the country. We have been advised by the Grain Millers Association that their members have started receiving wheat as at October 08, 2018 from a consignment of 30 000 metric tonnes which will be adequate for 22 days.

“By that time, the local farmers would have started harvesting in earnest. The sector would receive wheat from the local harvest.”
VP Mohadi spoke on the exchange rate and the proposed two cents per dollar tax.

“The Government position has not changed with regards to the bond note vis-à-vis the US dollar,” he said. “We have been briefed about the sectors under pressure and Government is taking corrective measures. I have instructed ministers to delve into the challenges and report back.

“Government has been briefed and discussed the effects of the two cents tax on the dollar on the market. We have also been briefed about the exemptions and Government is now seized with the fine tuning of the Statutory Instrument that will operationalise the tax. The two cents on the dollar tax is not yet operational, so there is no need to panic.”

Zanu-PF heads of departments met at the party headquarters in Harare yesterday to review the current economic situation and made several recommendations to Government.

Briefing journalists after the meeting, Zanu-PF Secretary for Information and Publicity Cde Simon Khaya Moyo said they recommended Government to scrap Statutory Instrument 64 which banned the importation of certain products.

“The revolutionary party calls upon the Government to consider revoking SI064/2016 in light of the current economic climate as we heard towards the festive season,” said Cde Khaya Moyo.

“Zanu-PF directs the Government to immediately enforce the law to eliminate all forms of informal money market activities. The party directs that the Government ensure that prices of goods and services reverts back to those ruling at the time prior to the pronouncement of the fiscal and monetary policy measures.”

The party noted that there was a visible political hand in the truant and unjustified price hikes.