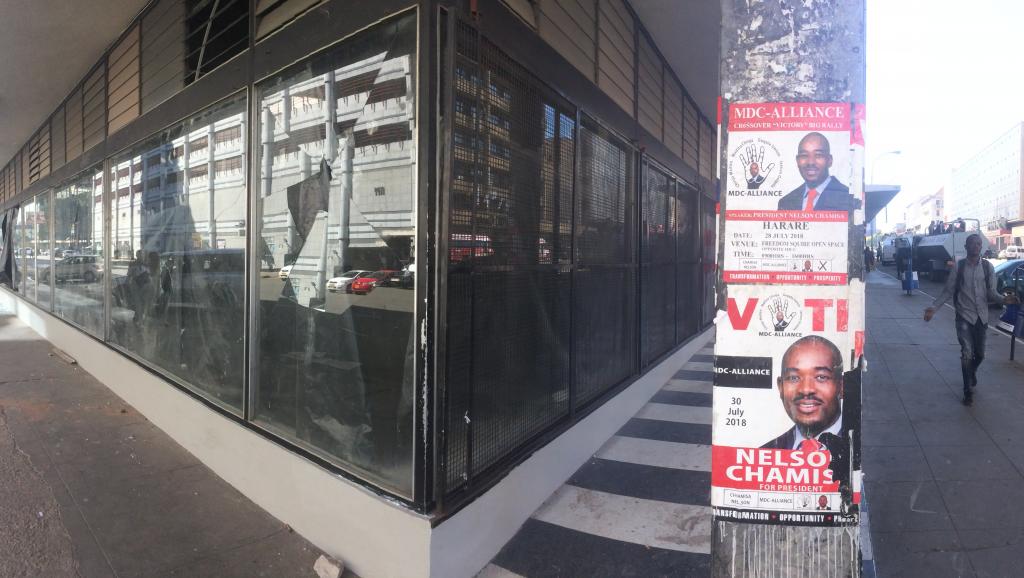 A deserted street in Harare, with many shops closed, in the wake of the violence in August 2018.RFI/Alexandra Brangeon

It is just over a year since activists took to the streets of the Zimbabwe capital Harare to protest delays in announcing the results of presidential elections. The army was called in to crush the protests, and six people were shot dead.

As the country remembers that tragic day, some family members of victims have been speaking out.

In a video posted on Twitter, Alison Charles recalls how on 1 August 2018, she had to go and identify the body of her brother, Gavin, one of six people shot dead in the security crackdown.

She found her brother’s body lying face down in a metal coffin on the back of a police pick-up truck.

“I identified him by his dreadlocks and the shoes he was wearing because his face was down,” said Alison Charles, her voice breaking with emotion.

“They threw him like a dog off the road into that coffin,” she said, adding that her brother was shot while trying to help a badly wounded person.

Activists have this week visited the graves of some of those killed, and the Zimbabwe Human Rights Forum on Friday held an event to remember the day using the hashtag #Wehavenotforgotten.

While memories of the crackdown are still vivid, state media says police have undergone retraining to bury the “ghost of 1 August”.

“Part of that retraining has focused on human rights-related aspects of policing and law-enforcement,” Foreign Minister Sibusiso Moyo said on Thursday.

The training is in line with recommendations made by the Motlanthe Commission of Inquiry into the killings. The commission recommended that the police be given the skills and capacity to deal with rioters, and be trained to be non-partisan.

Army to operate under police command

Moyo said in future, using the army to quell unrest should be avoided.

A new draft security law states that if the army is called in, soldiers have to “operate under the command structure of the police,” he added.

But observers say the draft law — the Maintenance of Peace and Order Bill — has just been given an “adverse report” by the Parliamentary Legal Committee because some of its clauses are deemed unconstitutional.

“If the Bill is not revised extensively it will have a chilling effect on freedom of expression, freedom of assembly and the right to demonstrate, all vital to a democratic society and all guaranteed by the Constitution,” notes parliamentary watchdog Veritas.

No soldier has yet been prosecuted for the 1 August killings, and the EU delegation to Harare has called for those responsible to be “held accountable to end impunity”.

On Thursday the US State Department said it was placing a former top Zimbabwean army commander and his wife on its targeted sanctions list for what it called “gross violations of human rights”. The official is Anselem Nhamo Sanyatwe, who was the commander of the Presidential Guard that led the 1 August crackdown.