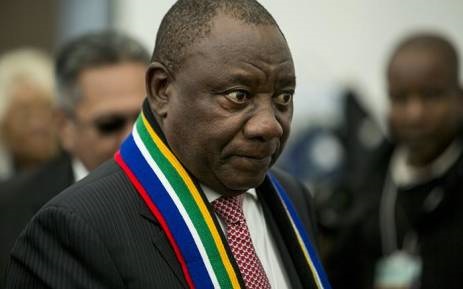 (c) ON MAY 8, Cyril Ramaphosa will inevitably secure his first mandate
from the South African electorate, but the play of numbers in a poll where
voter loyalties are wavering can determine whether he emerges with firmer
control of his divided party and returns for a second term in 2024.

Poll forecasts vary so wildly that some observers are choosing to ignore
them altogether – from 61 percent for the ruling African National Congress
(ANC) according to an IPSOS poll published in March, to between 49,5 and
51 percent, according to figures released by the Institute for Race
Relations (IRR) this week.

Political analyst Richard Calland said voter uncertainty was at
unprecedented levels and growing as voting day draws near.
“It is the first time we have seen that in 25 years.”

By almost any prediction, two outcomes are certain. The ANC will remain in
government nationally and in eight provinces – given Julius Malema’s vow
not to form any coalition with the Democratic Alliance – and voters will
inflict a measure of punishment, tiny or dramatic, on the ruling party for
the rent-seeking excesses of Jacob Zuma’s two-term presidency and their
impact on the economy.

But academic and political analyst Stephen Friedman suggests the clue to
Ramaphosa’s future within a divided party lies not in comparing next
week’s result to that of 2014 when the ANC won by 62,4 percent, but rather
to how it relates to the historical low of 53,9 percent in the 2016 local
government elections.

“If the party has done better than in 2016, then he is going to be in good
shape, he will presumably have more authority. The calculation people will
make within the ANC, is that it will mean Ramaphosa has added to the ANC
vote, with him as president of the ANC, the ANC has improved its position
and that should strengthen his position in terms of being re-elected,”
Friedman said.

“It would be more difficult to read if the ANC did not do that. There may
be people who say this man is not a vote winner, and then he could argue
again that without him the ANC would be the opposition party, so it really
depends how that process pans out. It could take a couple of years. Talk
that he could be forced out next year is fantasy.

“The issue is going to be 2022,” he added, referring to the ANC’s next
elective conference.
Many in the party will simply be indebted to him for gainful employment in
a country where holding elected office often means the difference between
being poor or middle class.
The threat to the president and his renewal path comes instead from
heavyweights he inherited from the Zuma era.

Friedman thinks, and the Malusi Gigaba saga supports this, that Ramaphosa
will leave it to the prosecuting authorities to deal with corruption
allegations against the likes of ANC secretary-general Ace Magashule
rather than waste political capital on getting them out of the way quickly
after the elections.

When the ANC in Gauteng put out a media statement at Easter claiming
voters have said their continuing support for the party was conditional on
it pursuing Ramaphosa’s “New Dawn” ideal of a corruption-free state, it
was both a warning to the old guard and a rallying cry to stop further DA
growth in the key province.
This week, the DA leaked data from the party’s secret polling system
indicating it would get 38 percent to deprive the ANC of an outright
majority in the economic centre of the country, with only 45 percent of
the vote.

The latest IRR survey predicts the ANC could drop as low as 42,8 percent
in the province.
Yet it is not the seismic shift the DA claims if compared with the figures
from 2016 when its vote share was 37,2 percent to the ANC’s 45,8.

The party’s case for governing nationally by showing that it does so
better than the ANC locally looks less convincing after it encountered the
hard realities of running Johannesburg and Tshwane and infighting and
coalition strife sent it back to the opposition benches in Nelson Mandela
Bay.
In the Western Cape, its flagship project, the DA risks losing the
outright majority it has held for a decade after the bruising ousting of
former mayor Patricia de Lille, whose predictable cries of racism
resonated with parts of the province’s Coloured majority.
But by-elections have shown the DA may have over-estimated its support
here for a while, and a DA insider said it seems votes the party lose next
week would go to the ANC and the EFF, rather than De Lille’s fledgling
GOOD Party.
“We will lose votes because of it, but we don’t see the votes going to
her. There is a more a sense of dismay with all sides because of the
infighting and so the votes are going to other parties,” the party
strategist said, adding there were signs that voters were defecting to the
ANC because they had faith in Ramaphosa and want to strengthen his hand
against the party’s regressive factions and the EFF.
The IRR puts the DA’s support in the Western Cape at between 44 and 51
percent, the ANC at about 28 percent, and the African Christian Democratic
Party at 7 percent, with the Economic Freedom Fighters just behind at 6.8
percent.
In an email sent to some
100 000 potential swing voters in the Western Cape on Wednesday, the DA
cites these survey outcomes and concedes that if it cleared 50 percent
here it would be by the skin of its teeth.
“What we do in the next week could be the difference between a DA-run
Western Cape, and an ANC/EFF-led Western Cape …
“A few single votes could mean the difference between the DA winning or
losing the Western Cape, so every vote counts! Please encourage all your
friends, family and colleagues to get out and vote on May 8.”
In the Northern Cape, third on the DA’s list of regional ambitions,
analysts think the ANC’s majority remains safe, for now.
Nationally the DA is forecast to take anywhere between 18 and 24 percent
of the vote next Wednesday, compared to 22 percent five years ago, and its
strong 26-percent showing in 2016.
A setback in Mmusi Maimane’s first national election as DA leader could
confirm he has failed to bridge the different ideological backgrounds of
its members and turn its carefully worded, reworked liberal policies into
a relatable message.
Calland notes that the party remains hesitant and divided on the key issue
of affirmative action, and cites research in Gauteng showing that
disaffected ANC voters were leaning towards the EFF rather than the DA.
“When you have competing ideological positions and divisions in a party,
the one thing that could resolve that is good strong leadership and
unfortunately what we are seeing reflects not so well on the current
leader who appears not to have been able to offer consensus and a clear
policy position to voters of the party.”
The EFF, with scant governing record but a blunt, radical message, is
forecast to grow to 14 percent from 6.35 percent in its first ever
election five years ago.
Even before one considers the impact on national politics, its strength
could pose an immediate conundrum for the ANC in Gauteng where it may have
to choose between forming a grand coalition with the DA or a risky one
with the EFF.
“It may face a very difficult choice. It may make the strategic choice
that the greater threat is coming from the EFF, but the contrary argument
is that by going into partnership with them, you give them influence.
Ideologically, the ANC may have more in common with the DA but that is not
always the primary consideration when forming a coalition.”