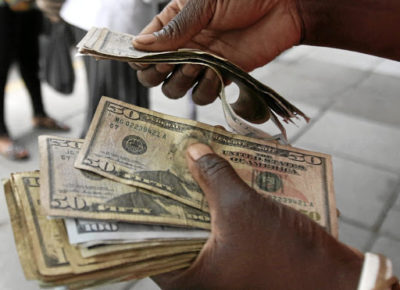 The government of Zimbabwe has made the contentious decision to prohibit local trade in foreign currencies, including the US dollar, with immediate effect, a move that has sparked widespread condemnation.

Aside from that, it has restored the Zimbabwe dollar, which was abandoned due to hyperinflation in 2009, when the nation primarily accepted the US dollar and South African rand as its official currencies.

Zimbabweans, who have little confidence in their own currency, were taken aback by the decision. At the time of the Zimbabwe dollar’s abolition, the exchange rate was Z$35 quadrillion to one dollar.

In the country almost everything is imported, and there is a scarcity of hard currency. The cost of living in this country is very high. Unemployment is prevalent in the United States.

Different approaches to solving the issue have been attempted, including the introduction of bond notes in 2016, which served as an alternative currency that was only acknowledged in Zimbabwe.

It was nominally linked to the US dollar, but in fact it was worth considerably less – leading to the development of a flourishing black market and the transformation of Zimbabwe into a cashless society that relies on card-based transactions or dealing with mobile money.

People were often required to pay in US dollars for items purchased in stores and for services rendered, such as doctor’s bills.

Mr. Emmerson Mnangagwa, President of Zimbabwe, described the restriction as a “vital step towards restoring normality to our economy.”

He went on to say that although the multi-currency system assisted in stabilizing the economy, it did not offer us control over monetary policy and instead put us at the mercy of the US dollar’s value, which has been the underlying cause of inflation.

The authorities also claim that since the US currency is so high, it is prohibitively costly to produce products locally, which is why companies choose to import goods.

They have been damaged by the mishandling of the economy by the administration of Robert Mugabe, who was the President of Zimbabwe. In order to keep up with rapidly rising inflation, the central bank was obliged to issue banknotes with ever-increasing face values.

In July 2008, annual inflation hit a staggering 231 million percent. When it reached a high of little less than 80 billion percent in mid-November 2008, officials decided to stop publishing monthly data. The prices of products, according to Forex brokers in Africa, increase by a factor of many times every day. Despite the fact that it was against the law at the time, many individuals chose to retain their US dollars, which they obtained on the black market. Businesses started to place orders for foreign money. Finally, the Zimbabwean authorities were forced to catch up, abolishing the Zimbabwe dollar and authorizing the use of a variety of other currencies, including the Chinese yuan and the Indian rupee.

One currency might be used to buy something, while another currency would be used to get change.

The fact of the matter is that Zimbabwe has run out of all of these currencies because it is importing much more than it is exporting, and as a result, the country has become a cashless society.

What Were People’s Reactions?

The majority of people, who connect the Zimbabwe dollar with food shortages and exploding prices, have expressed dissatisfaction with the lack of advance notice. On Monday, the RTGS formally replaced the Zimbabwe dollar as the country’s only legal currency.

Following the announcement, supermarkets and businesses in the formal sector reacted with new pricing in Zimbabwean dollars, which were, nevertheless, out of reach for many people in the population.

A first-time doctor’s consultation now costs Z$1,800, which is more than what a teacher or nurse makes in a month.

Despite the fact that informal merchants dominate the economy and depend on US currency for imports, they have pledged to disobey the order.

According to the BBC, a street seller in Zimbabwe’s capital, Harare, said: “How did it become conceivable that the United States dollar was no longer recognized? It’s not going to work. We really want more people to utilize it so that we may get more customers as street sellers. Instead, throw out the bond note.”

David Coltart, a legislator with the opposition Movement for Democratic Change (MDC), described the decision as “complete lunacy.”

“Because of a lack of confidence in the RTGS dollar, the market has begun to re-dollarize its holdings. You can’t make people fall in love with a currency… This will only serve to aggravate the turmoil “He said this on Twitter.

If the decision is not changed, the trade unions have warned of “mass action.”

Employees, according to the Zimbabwe Congress of Trade Unions (ZCTU), should be paid in US dollars once again.

There are still black market merchants operating on the streets of the city who are willing to exchange and take US money.

When compared to the official exchange rate of 6.2, the black market value of a US dollar remains constant at 11 Zimbabwe dollars for every dollar in circulation.

At the end of the day, Zimbabweans have shown to be adept at adapting to one economic catastrophe after another throughout the years.

After years of hyperinflation destroyed the value of the Zimbabwean dollar, the government of Zimbabwe decided to allow the use of the US dollar and other foreign currencies as legal currency in the nation in 2009.

Some people, however, think that the step will not be enough to stem the collapse of the RTGS.

Mr. Eddie Cross, an economist and founding member of the Movement for Democratic Change (MDC), Zimbabwe’s largest opposition party, said: “I believe it is a foolish policy.”

“The exchange rate will continue to fluctuate, and this is totally out of whack. I’m hoping that people will refrain from taking to the streets tomorrow. Cross told Al Jazeera that the situation was “catastrophic.”

According to independent economist Victor Bhoroma, companies with debts denominated in foreign currencies may see the cost of repaying such commitments rise significantly. ”

As Bhoromoa explained to Al Jazeera, this move implies that any obligations previously committed in USD are now due in the local currency.