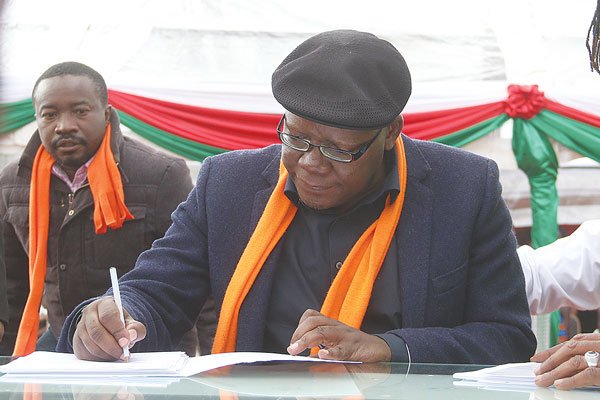 THE crippling fuel and power shortages facing Zimbabwe are likely to get worse if government fails to deal with price distortions on the market, former Finance minister Tendai Biti has said.

Speaking in a radio interview, Biti, who also chairs the Parliamentary Portfolio Committee on Finance, said government does not have money to continue subsidising fuel and should allow private players to fill the gap.

“The energy situation is dire; the fuel situation is particularly dire as evidenced by the long queues. We require about 1,6 billion litres of fuel every year, 1,12 billion diesel and about 570 million litres of petrol at a cost of $1,3 billion to US$1,5 billion per year,” Biti said.

Biti, credited by many for bringing stability to the fiscal space during his tenure as Finance minister in the inclusive government that ran from 2009 to 2013, said the solution to the glut of problems
facing the country was to redollarise and end the RTGS dollar era.

“We need to liberalise fuel procurement. Anyone who has foreign currency, who can bring fuel should be able to bring it, but here is a catch; you can’t bring into Zimbabwe fuel in US$ and sell it in bond notes because soon you will run out of the foreign currency. So, the minute you liberalise fuel you must essentially redollarise the economy,” Biti said.

Biti also called on Chasi to break fuel cartels accused of holding Mnangagwa’s government at ransom and fiddling with foreign currency pricing in the country.

“The minister has to break the fuel cartels; the oligopolies and monopolies that are controlling and stifling our fuel industry, the fuel in this country is controlled by two companies, Trafigura of Singapore. Singapore does not produce anything, why should Zimbabwe buy the bulk of its fuel from a middleman called Trafigura? He (Chasi) has to break that cartel. The pipeline is controlled by Glencore, I
shall not mention its local partners. The minister must break that monopoly and allow competition,” he said.

But Chasi, instead, said he was more inclined at controlling demand by conjuring plans and legislation that could control usage of fuel and energy as opposed to meeting the demand.

Mnangagwa last week moved Jorum Gumbo from the Energy portfolio, presumably because he had failed to deal with the fuel crisis, which Chasi says he has solutions to.

“We are going to resolve the challenges. I cannot give you a date, but we are going to be moving at a fast pace, that’s what the situation demands.”
Zimbabwe is, meanwhile, suffering a crippling power shortage as Zesa is failing to service a US$80 million debt to South Africa and Mozambique, who have been exporting electricity to the country.

Acting Zesa chief executive Patrick Chivaura said they have been hit by foreign currency shortages and do not have any solution until and unless the debts are serviced in full.

“We have not been able to pay any of our bills from August last year to date. South Africa can still give us power, but we still need to clear what we owe them, about $35 million and about the same amount we owe Mozambique. The major challenge is foreign currency,” he said.

The power utility is also struggling to recover a total of ZWL$1,2 billion in debts owed by government ministers, ministries and individuals.