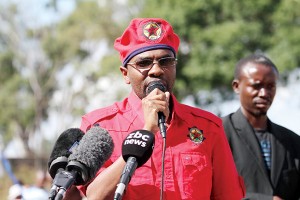 THE Zimbabwe Congress of Trade Unions (ZCTU) has warned government against implementing economic reforms that would add pressure on the country’s already strained working population.

But ZCTU president, Peter Mutasa, told The Financial Gazette that the labour body was staunchly against any International Monetary Fund (IMF) or World Bank imposed reforms which he said would suffer the same fate as the failed Economic Structural Adjustment Programme (ESAP) of the 1990s.
“We are very much against it. It’s a second ESAP and we have seen and suffered the consequences of an ESAP. So what we are asking the government to do is that we don’t need to embrace externally imposed policies by the IMF, World Bank and other multilateral institutions.

Public sector spending accounts for more than 90 percent of government revenue, while domestic and external debts continue to soar. Mnangagwa is under pressure to re-engage multilateral lenders over the country’s debt situation.

The country’s debt and arrears clearance plan, which was adopted in Lima, Peru, two years ago, has stalled over arrears to the World Bank and the African Development Bank as well as failure to stick to the agreed reforms.

Former president Mugabe’s intransigence was blamed for the lack of progress and his successor is expected to renew the reform agenda.

“You can’t eradicate poverty by going through a free market economy where the desire and appetite to make profits dictates. You need the government’s intervention through policies and regulations.

“You also need to empower certain segments of society like trade unions who play a major redistributive role of getting the much needed resources even for the government from successful businesses to the fiscus and also from successful businesses to the poor men and women in the society,” Mutasa said adding that Zimbabwe should not accept hook, line and sinker the dictates of the multilateral lenders.
Apart from economic reforms, Mnangagwa must deal with political, electoral and media reforms.The country’s labour market is in disarray with only five percent of workers in the formal economy and 94,5 percent either unemployed or underemployed or self-employed, according to the ZCTU.

Despite their misgivings about the reform agenda workers are still hopeful of a better economy under Mnangagwa.

“Workers have got high expectations. Some 120 000 people are working without pay and the few that are earning salaries are getting a fraction of their salaries, in most cases a third.

“Those who are earning salaries are earning a fraction of the poverty datum line; maybe a third. Workers are expecting the new administration to have a clear break from the past. The past regime had a challenge with consultations. They used to do things the way they wanted and they would hold everyone to ransom and this is what we want the new administration to depart from,” Mutasa said.