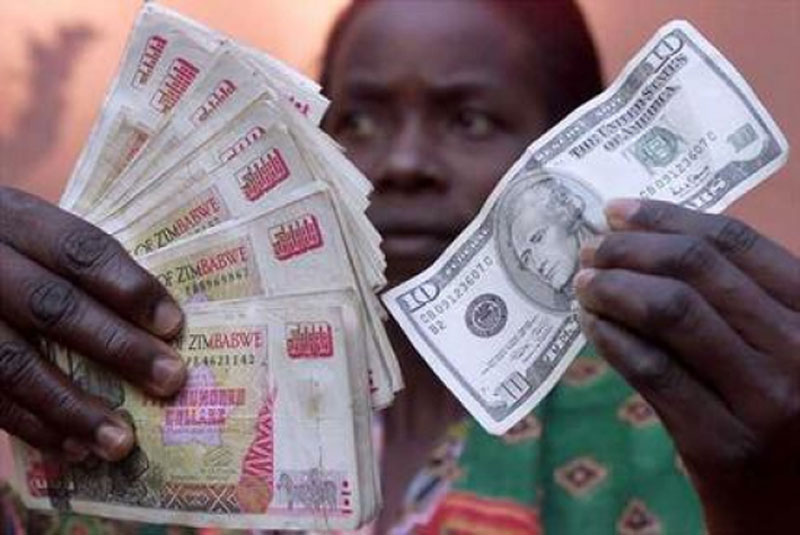 Tapiwa Chagonda
THE Zimbabwean economy has continued to experience turbulence, despite having managed to weather a devastating spell of hyperinflation which peaked in 2008.

An economic area which has remained a thorn in the flesh for ordinary people has been the volatile currency. The country has struggled to sustain a stable currency. The Zimbabwean dollar was the official currency between 1980 and 2009. In the wake of hyperinflation of 2008, it was retired and the country transitioned to a basket of currencies.

In early 2019, the multiple currency regime was replaced by a new currency, which was renamed the Zimbabwe dollar by Reserve Bank of Zimbabwe. But the outbreak of the COVID-19 saw the multi-currency system returning to the fold.

The implication of Zimbabwe’s currency woes has been that the foreign exchange rate has continued to be largely determined by the parallel market. This has its deep roots in speculative activities that were rife during the years of hyperinflation and which have persisted.

Pricing of goods has, thus, continued being dictated by the parallel market and foreign currency has remained in short supply. Speculators continue to engage in activities that rake in quick profits, at the expense of the economy and Zimbabweans. Speculators include influential political figures, big businesses and ordinary individuals.

In a bid to stem currency volatility challenges and ease shortages of foreign currency, the Reserve Bank of Zimbabwe introduced the foreign exchange auction system in June 2020. But this didn’t liberalise the foreign currency market, as the bank has interfered with the auction in an attempt to control the exchange rate.

In my view economic reforms alone cannot end the country’s economic crisis. Instead of more economic interventions, Zimbabwean society needs to introspect and assist in resetting the country’s ethical compass.

I am arguing for this approach from a sociological perspective of ethics. My doctorate focused on the response of the working class in the capital Harare to Zimbabwe’s hyperinflation and political crisis in the 2000s. One of my key findings was that a lot of workers’ ethical principles had been eroded by hyperinflation which required a repertoire of survivalist responses. These sometimes bordered on corruption and speculative activities.

In addition, in my current academic role I have had to grapple with the concept of ethics, not only from a research perspective, but also from a broader societal perspective, since it acts as the moral compass that guides our behaviour. Being an ethics student has made me revisit my thesis on Zimbabwe’s unending economic crisis, in addition to proffering possible solutions to this perpetual challenge.

To keep pace with hyperinflation, a lot of Zimbabweans had to engage in speculative activities. This relied on hoarding commodities which were in short supply in the 2000s. They would often resell these at inflated prices on the parallel market. This meant that prices of goods continued to spiral, with speculators making a quick buck.

This behaviour of making quick money through speculation appears to have become ingrained in Zimbabwean society’s social fabric. Foreign currency traders have continued to operate a parallel foreign currency market, despite the taming of hyperinflation. In some instances they act on behalf of business and top politicians.

To eradicate the cancerous scourge of speculative behaviour, the Zimbabwean society will have to rely on societal ethical values as happened successfully in Asian countries such as China, Taiwan and Singapore. These countries blended Confucianism with business practices.

Confucian ethics dictates hierarchical relationships and identification with social rules. It also emphasises “self control of individuals” in their conduct.

If this value of discipline and good conduct were exercised in Zimbabwe’s business ethics, the country’s economic fortunes would have changed for the better.

To kick-start the much-needed ethical regeneration of Zimbabwean society, political leaders need to take the lead in the fight against corrupt and speculative activities.

Rhetoric that purports to castigate corruption and putting in place economic measures to alleviate Zimbabwe’s monetary woes, will not suffice.

A Thomas Sankara kind of ethics

Leadership is what is needed. Sankara, the late former President of Burkina Faso between 1983 and 1987 enforced a rule that required the country’s political leaders to publicly declare their financial assets and wealth before being sworn into office.

In addition, a continuous financial audit while in political office should subsequently be mandatory. The Transparency International chapter in Georgia has been doing this, and this assists in monitoring any unusual variances in politicians’ asset declarations.

What needs to be done

The government of Zimbabwe should take a leaf from Sankara’s Burkina Faso by expeditiously arresting and prosecuting individuals found guilty of corrupt on speculative activities, regardless of status in society.

South Korea does it. Corrupt leaders are arrested, regardless of political or financial clout.

In addition, the Zimbabwe Anti-Corruption Commission should be given the capacity to execute optimally. It’s meant to curb and expose corruption. But it’s blunted by underfunding.

It is also urgent that the Zimbabwean government should promulgate whistleblower protection legislation. Whistleblowers in the private and public sectors need to be protected.

The government also needs to take steps to improve governance practices in the private sector. The head of the Zimbabwe Anti-Corruption Commission Justice Loice Matanda-Moyo, recently claimed that the private sector was the biggest culprit of corrupt activities in the country.

The Confederation of Zimbabwe Industries and the Zimbabwe National Chamber of Commerce, the major representative bodies of business in Zimbabwe, should insist that every company has an ethics or compliance office whose mandate would be to enforce ethical business conduct.

And it should be mandatory for all company top executives to issue an ethics statement annually, which reflects on their organisations’ ethical practices, good or bad.

Creating a society that is ethical in its conduct is a process that takes time. It should include inculcating ethical principles in the schooling system.

This would mean that from a young age, Zimbabweans are taught about moral and upright behaviour.

A model that is worth emulating is dotoku, or moral education, in the Japanese primary and junior high school education. This was introduced in 2018, and is a full-fledged subject with standardised textbooks.

This approach should be attached to other subjects too, such as science and business. In other words, the word “ethics”, should become synonymous with Zimbabwean society’s interactions and behaviour, and not an alien word.