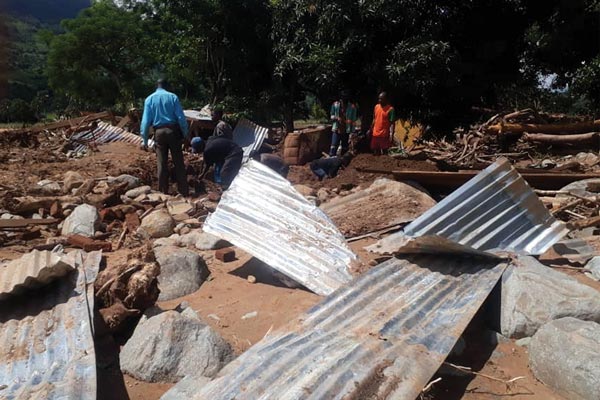 The Japanese government has released a US$450 000 nutrition, HIV and Aids and water, sanitation and hygiene (WASH) package for Zimbabwe, which is aimed at assisting food-insecure communities in Binga, Buhera, Chiredzi and Masvingo and US$96 054 to support communities in Manicaland province, who are bearing the brunt of Cyclone Idai and the drought.

Cyclone Idai hit the country in March 2019, destroying infrastructure and livelihoods mainly in Chimanimani and Chipinge districts and some parts of Mozambique and Malawi. Parts of Masvingo and Matabeleland were also affected.
About 270 000 people were affected by the tropical storm and subsequent floods and landslides left 340 people dead and several others missing.

A joint Press statement by the government of Japan and International Organisation for Migration (IOM) yesterday said the funds would help in the construction of new houses for cyclone victims.

“The government of Japan has released US$96 054 to further support communities in Manicaland affected by the dual natural disasters of Cyclone Idai and drought,” the statement read.

“This project will be implemented by IOM in close collaboration with the Local Government, Public Works and National Housing ministry, the Department of Civil Protection and local authorities within the province.
“It will complement the Japan-funded shelter emergency response project to assist the victims of Cyclone Idai which was carried out from April to October 2019.”

The fund will allow the construction of transitional shelters for 50 households, approximately 250 individuals, according to the statement.

Local builders will be trained on the construction of resilient and better quality shelters.

The assistance will allow further cluster co-ordination support, enabling partners to improve their target and delivery of shelter-related activities for the additional 2 000 displaced households and 10 000 individuals.

“While Cyclone Idai occurred over a year ago, many of the victims, whose houses were destroyed, still do not have suitable shelter. It is my hope that this assistance will provide some of them suitable homes so that they start to rebuild their lives,” he said

Japan’s WASH package will be run in collaboration with Unicef and the Zimbabwean government and will focus mainly on the most vulnerable women and children.

Toshiyuki said rural women and children were the most vulnerable during times of humanitarian crises, so the fund would help them have the nutrition, health, water and sanitation that they need during such critical times.

Through the programme, 95 000 children will be screened for malnutrition, and 34 000 will be treated and 6 700 pregnant women and new mothers will receive training on preparing safe and healthy food.

HIV and Aids interventions will reach 2 400 vulnerable children, pregnant women and adolescents. About 10 000 children will benefit from WASH programmes, including construction and rehabilitation of water points at 25 schools.