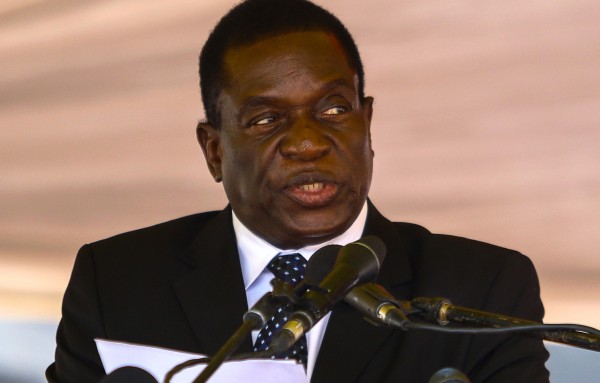 Zimbabwe President Emmerson Mnangagwa has called for removal of political and economic sanctions by Western countries.

File: Zimbabwe President Emmerson Mnangagwa on Thursday called for removal of political and economic sanctions by Western countries. Photo: AFP / Jekesai Njikizana
HARARE – Zimbabwe’s new President Emmerson Mnangagwa on Thursday called for the removal of Western sanctions on his government during a speech to ruling party officials and said elections due in 2018 were nearer than “you expect”.
Mnangagwa, 75, became leader of the southern African nation last month after the military and ruling Zanu-PF turned against Robert Mugabe who had ruled the country for 37 years and was seen grooming his wife Grace to succeed him.While the European Union removed sanctions on Zanu-PF officials, members of the military and some government-owned firms in 2014, the US has kept a travel and economic embargo on several ruling party elites.”We call for the unconditional lifting of the political and economic sanctions, which have crippled our national development,” Mnangagwa told a meeting of the Zanu-PF central committee in downtown Harare.”We realise that isolation is not splendid or viable as there is more to gain through solidarity, mutually beneficial partnerships.”

The international community will be closely watching the next elections in 2018, which Mnangagwa said would be free and fair and would be held nearer than most people expect.

The vote is due at the end of July in 2018 but there is talk it can be brought forward as early as March.

“Government will do all in its powers to ensure that the elections are credible, free and fair. These elections are nearer than what you expect,” he said without elaborating.