Renamo dissidents do not recognise Momade as leader

Maputo (AIM) – Armed dissidents from Mozambique’s main opposition party, the former rebel movement Renamo, have declared that Ossufo Momade is no longer leader of the party, and have warned the government against continuing to negotiate with him.

Source: Renamo dissidents do not recognise Momade as leader – The Zimbabwean 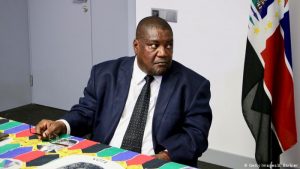 At a press conference held somewhere in the bush of the central district of Gorongosa, as reported by the Portuguese news agency Lusa, the dissidents read out a statement urging “the government, in the person of the Mozambican President (Filipe Nyusi), to interrupt the dialogue with Ossufo Momade”.

Should the government insist on talking with Momade, “the consequences could fall on the Mozambican people”, the dissidents threatened. They urged the government “to respect us because we are Renamo”.

The group is led by Mariano Nhungue, who holds the rank of major-general in the Renamo militia, and it now calls itself “the Renamo Military Junta”.

It accused Momade of “kidnapping and isolating” Renamo officers who had been close to his predecessor, the late Afonso Dhlakama.  “We appeal to the Mozambican public and to the contact group from the international community in the negotiations to remain calm, because the Renamo Military Junta will shortly announce feasible measures which will allow the peace process to go forward”, announced the statement.

The dissidents first appeared publicly in June, with demands for Momade’s resignation. They even threatened to kill him, if he did not leave. The Renamo leadership reacted by dismissing the dissidents as “deserters”.

The dissidents claimed that Momade had executed Renamo brigadier Josefa de Sousa. However, in mid-June the Renamo leadership produced Sousa alive, and allowed him to speak to reporters (although there were strong indications that he was being held prisoner).

It is not known how many Renamo fighters support Nhungue and his “Military Junta”. What is certain, however, is that the only person who can lay claim to democratic legitimacy in Renamo is Momade, since he was elected the party’s leader by a wide margin at its congress in January.

Momade is also the Renamo candidate in the presidential elections scheduled for 15 October. If the dissidents succeed in dethroning Momade, there is no time for Renamo to choose a new candidate, since presidential nominations closed on 16 July.

Nyusi has been negotiating with Momade over the terms of the demobilisation and disarming of the Renamo militia and of the inclusion of its members into the defence and security forces, or their reintegration back into civilian life. The government hopes that the demilitarisation of Renamo can be completed in August – but serious doubts will be cast over this if Momade is removed from the picture.

Newer Post
Renamo wants the state to intervene against dissidents
Older Post
The reluctant reformer, Mnangagwa is thy name