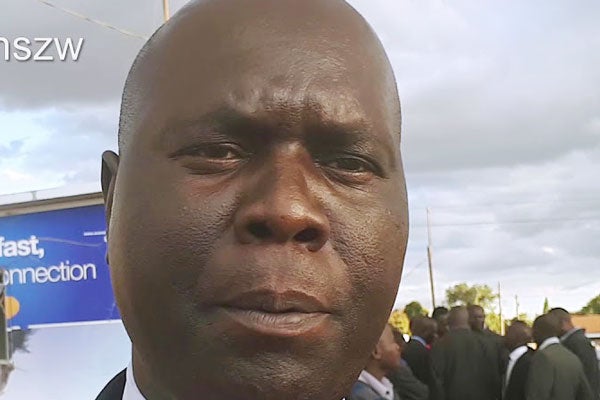 Harare mayor Herbert Gomba yesterday came under fire from residents over dirty water being supplied by the local authority.

The residents went on to demand that he publicly drinks tap water to prove that it was not contaminated.

Gomba and his councillors met different stakeholders during a town hall meeting, where the issue of Harare’s water took centre stage amid concerns from residents that the local authority was forcing dirty water on them.

One Mabvuku resident challenged Gomba to drink a bottle of water that he had brought from the suburb to prove that Harare water is clean.

“Your worship, we kindly ask you to drink Harare water that the council supplies to prove that it is not contaminated. Right now, you are drinking bottled water instead of Harare water,” he said.

Gomba asked the resident where he got the water because Mabvuku residents always claim they last got water from the tap a long time ago, much to the amusement of the residents.

“Our dams are the same, our machines and chemicals that pump water are the same, the only difference is the pipes to different areas that have deteriorated,” he claimed.

Gomba said council was hoping that the 2020 budget would help them to invest in water and sewage reticulation. He said currently, the funds they had were inadequate to meet the demands.

“Water facilities that were built in 1952 have now collapsed and we hope that the budget will invest in water and sewage to meet the demand,” Gomba said, adding that local authorities were now crumbling because they lack support and funds.

He appealed to the ratepayers and residents to pay their bills so that the local authority can fund water and sewage reticulation.