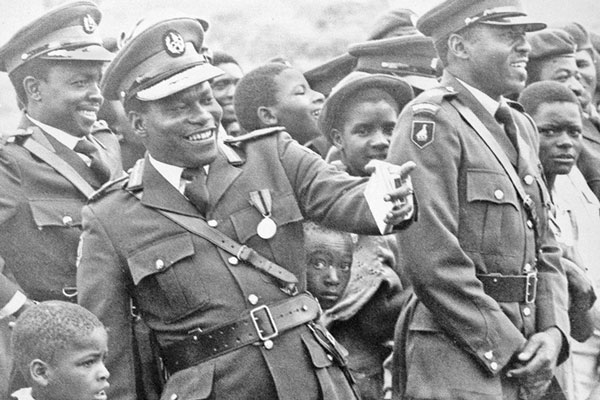 I was fascinated by this novel — by its supple, subtle, multi-stranded narrative, certainly, and by its accomplished technique, but also by a minor inside-baseball mystery that ultimately became a bonus strand in my reading: Who wrote it?

The book is credited to “C.B. George,” who, we are told, “spent many years working throughout southern Africa.” We are further told that “he now lives in London.” Yet he has no apparent history as a writer, and no claim is made that this is a debut work. Indeed, it would be astonishing if it were — like being able to play the “Moonlight” Sonata with no prior experience of the piano. Therefore, “C.B. George” must be a pen name, and speculating about who — or, more accurately, what kind of established writer — lies behind it became a matter of ongoing interest, illuminated by what I took to be clues scattered throughout the text.

The novel is set in contemporary Zimbabwe, that landlocked and luckless country in the southeast of Africa. Its modern history began in the late 19th century when the British came calling, not at first for the greater glory of Queen Victoria, but for gold and diamonds. A well-bred scuffler named Cecil Rhodes got the ball rolling. Later the country was named Rhodesia in his honour, and like Kenya to the north, it attracted second sons and second-chancers and second-raters from all over Britain to a new and classically colonial life.

As an imperial possession, it lasted longer than most, but by 1965 the winds of change were blowing a gale. A unilateral declaration of independence attempted to prolong white minority rule, but to no durable avail. After a long civil war, majority rule was established and the country was renamed Zimbabwe.

The new nation inevitably fell victim to decades of post-colonial problems, culminating in the hyperinflation of 2008, which peaked at a monthly rate of 79,6 billion percent.
Early in the novel, a character reports the lament: “Zimbabwe used to manufacture cars. Now it imports paraffin stoves.” The comment is made during a game of squash. (By which point the tone of the early pages had convinced me that the author is a white Englishman of a certain type, old enough to remember at least folk memories of empire, if not empire itself. There is no I-told-you-so scolding, but the view is clearly from the mother country, so “C.B. George” can safely be seen as a crazy mash-up of very British signifiers, from C.B.E. — Commander of the British Empire — to King George and Prince George and St. George.)

The eponymous Rex Nhongo is General Solomon Mujuru, under a nom de guerre, a real-life hero of the war of independence who leveraged his status to become an integral part of the new power elite. The novel opens with a preface describing his real-life fate — found apparently burned to death in his house, earlier seized from a white farmer during land reforms. There may have been gunshots. The security detail may have been asleep. In any case, their radio was broken, and they had no minutes left on their cell phones. The attending fire engine turned back because its leaking water tank ran dry. This information is relayed in a straightforward, declarative style.

Despite the title, the death of Rex Nhongo plays no substantial part in the story. A gun that might or might not have been used at the scene becomes a minor MacGuffin, but there are no repercussions, no riots, no civil unrest. Indeed, some critics have found the novel insufficiently political. But in my view, that inattention is deliberate. The characters in the book, like people everywhere, largely ignore politics and simply get on with their lives. They can’t afford not to, and anyway, as the principal Zimbabwean character says: “It is hope that causes most problems.” We get little real sense of Zimbabwe itself in terms of its sights and sounds and smells, of the hustle of its daily routines. The setting is a bare stage; what matters in this story are the people.

But what people they are, and how well drawn they are. Principally there are three married couples whose lives and families collide and interact through backyard barbecues, play dates, domestic servitude and adultery. April and Jerry Jones are from Britain: she is on government service at the Harare embassy, he a diplomatic spouse at loose ends. They have a two-year-old son, Theo. Shawn McClaren is an African-American from New York, newly unemployed, who has changed his last name to Appiah and has accompanied his unstable Zimbabwean-born wife, Kuda, back to her homeland. They have an eight-year-old daughter, Rosie. Patson is a taxi driver, married to Fadzai, whose brother, Gilbert, is married to Bessie, who works as a maid in the Jones household. And so on.

The connections grow complicated, and mostly difficult. The three marriages are stressed in different ways. Two grow weaker, and one grows stronger, in inverse proportion to the reality of the pressures faced. Personal attractions and external repulsions produce unpredictable reactions. Not all the characters survive. Linking the increasingly intertwined strands is the secret policeman Mandiveyi, with problems of his own, in hapless pursuit of the aforementioned firearm. Anton Chekhov said that if you introduce a gun in the first act, you’d better use it by the third, and the author does, to stunning effect.

Along the way, the narrative’s eye flits from one character to another, like a camera zooming in, pausing and then moving on. These portraits are superbly achieved, and the text is studded with memorable observations. About young Gilbert’s seduction of Bessie and her subsequent unplanned pregnancy: “Wasn’t this always the outcome when a boy with too much confidence charmed a girl with too little?” Of Bessie and her much older sister-in-law, Fadzai, equally long-suffering: “Both women, for all their apparent practicality, are ruled by their generous hearts — often stoicism’s secret ingredient.” This author understands people and can effortlessly marshal a large cast through emotional intricacies.

All that said, there are minor weaknesses. The Appiah family’s story is seen mostly through eight-year-old Rosie’s eyes, related in an italicised dialect, full of misspelled words, presumably meant to represent the sound of a black New Yorker, which grew irritating very quickly and was unrecognisable to this Manhattan resident. (Leading me to stand firm in my conclusion about the author’s English background; while he might have spent many years in southern Africa, he surely hasn’t spent very many in New York.)

When it comes to Rosie, the author abandons his foothold as a latter-day Graham Greene and tries to become Stephen King, with a supernatural possession that jars in a text otherwise so acutely quotidian and superbly human — although it must be said that this gives the book its only real oh-my-God thriller moment, when the reader figures something out ahead of the characters. Win some, lose some. Over all, it would be churlish to let these small negatives outweigh a generally terrific achievement.

But whose achievement? Who is C.B. George? A general clue, I think, lies in the narrative’s swooping, restless movement, which feels like a long tracking shot, reminiscent of the nearly eight-minute opening of the 1992 Robert Altman movie, The Player. A more specific indication comes later, when April Jones asks her lover a question and adds a clarifier after the narrative interjects: “Then, off his apparent surprise …” “Off his” is a parenthetical character direction seen everywhere in movie scripts but never before in a novel.

I think C.B. George is a screenwriter — and now also a novelist of great quality. — New York Times