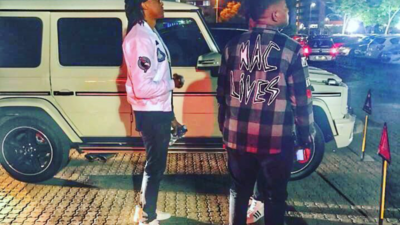 Just imagine: one day, you’re a typical dictator’s son, with the fancy cars, VIP access and high-end champagne to prove it. The next day, daddy is history – so what does that mean for you?

This is the predicament in which former Zimbabwean President Robert Mugabe’s two sons now find themselves. Not that they are not getting much in the way of sympathy.

Robert Jr and Bellarmine enjoy infamously lavish, luxurious lives. While living in Johannesburg, they stayed in a R70 000-a-month Sandton apartment and could easily drop R20 000 in a single night on the town. “Their aides don’t even want bouncers to ask for ID when they get to the door. They say: ‘Don’t they know who our family is?’” a bouncer at one top Johannesburg club told the Mail & Guardian.

That family name might not open so many doors any more.

The Mugabe boys’ Instagram feeds are a relentless parade of expensive clothes, collectable trainers and overpriced nightclubs. Despite coming from one of the world’s poorest countries, they were never afraid to flaunt their wealth.

In the wake of Mugabe’s dramatic resignation, those same Instagram feeds now offer a glimpse into how his sons’ lives are suddenly changing.

The selfies have stopped, as have the party live streams. Instead, on 15 November – as army tanks surrounded President Mugabe’s residence in Harare – both boys posted a short BBC clip of a Mugabe interview from the early 1980s. In it, Mugabe says: “I’m not going to have anybody advocate the overthrow of the country and remaining in the country. He’s not one of us if he does that.”

Needless to say, this small act of social media defiance did nothing to halt their father’s fall from grace. Since then, only Robert Jr has posted again: a Bible verse; and, on the day that Mugabe finally resigned, the word “MUGABE” written in red text on a white background.

Prior to Mugabe’s departure, comments on the boys’ Instagram posts were overwhelmingly flattering, bordering on sycophantic. The accounts are private, so only hand-picked followers are able to comment. A typical selection, from a photo of Bellarmine in a designer denim jacket: “U dope”, “Gucci on point”, “Looking super dope!!”, “platinum status”.

The tone has changed dramatically over the past few days. Emboldened by the tumultuous political changes, commenters are publicly venting their frustrations at Robert Jr and Bellarmine’s excesses – and indulging in more than a little schadenfreude. It did not take long for the boys’ social media “friends” to turn on them. There are more than 1 600 comments, overwhelmingly negative, on Robert Jr’s “MUGABE” post.

“Robert [and] Chatunga…did u ever walk the streets to really see what was going [on] in “your” country? apa you’re the same folks who were always saying “zim is wack” not realising its wacky because of you [sic],” wrote @joncloud_1.

“I understand standing with your father I mean you are allegedly his son…however we all hate him and his wife then you guys have been nothing but reckless wasteful who if in all that money and privilege could not make anything of yourselves I don’t see any hope for you in any future,” said @chiweda

Meanwhile, @_g_o_a_t.23 offered some useful advice: “I feel u man frm being extraordinary to just being ordinary now whre y’alls gonna get the money to spend n waste on useless stuff…U thoguht this was going to last y’alls should have started saving way before [sic].”

Via a private message, the Mail & Guardian reached out to both Mugabe boys for comment. They did not respond. On Instagram, however, Robert Jr did offer one last update. In Shona, he said: “Iyi yabva ya disconnectwa”. Translation: “This one just got disconnected”. One suspects that he’s talking about more than just social media. – Source: Mail&Guardian