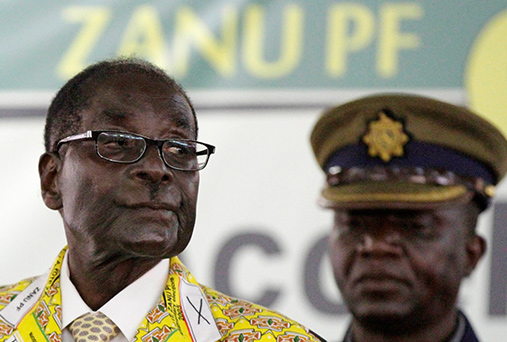 His early years as leader of Zimbabwe, following the transition from British colonial rule, saw some notable achievements through his heavy investment in social services. Areas including health and education saw dramatic improvements, with the country still enjoying one of the highest literacy rates in Africa. However, he later eroded his own track record.

During his 37 years in power, he presided over the brutal repression of political opponents and established a culture of impunity for himself and his cronies, while his government implemented a series of policies that have had disastrous consequences.

“While casting himself as the saviour of Zimbabwe, Robert Mugabe inflicted lasting damage upon its people and its reputation,” said Muleya Mwananyanda, Amnesty International’s Deputy Regional Director for Southern Africa.

As a leader of the resistance to the white minority government of what was then known as Rhodesia, Mugabe began his political life fighting against injustice. Imprisoned and later exiled for his political activities, he was one of more than 900 prisoners of conscience adopted in Zimbabwe by Amnesty International between 1965 and 1979.

Boosted by his image as a champion of the victims of imperialism, Robert Mugabe became Zimbabwe’s first post-independence prime minister in 1980 on a platform of reconciliation.

However, shortly after taking office, he deployed the repressive machinery of the state against political opponents. During the 1980s, in a military crackdown, known as Gukurahundi – loosely translates as “the early rain which washes away the chaff before the spring rains”, that widely targeted suspected opposition supporters, some 20,000 people were killed in Matabeleland and Midlands provinces. Many of the dead were unarmed civilians.

Amnesty International’s calls for the prosecution of suspected crimes committed by his supporters and by the security services went unheeded. In a warning that would prove prophetic, the human rights organization said at the time that a failure to hold anyone accountable for the Matabeleland and Midlands violations would set a dangerous precedent.

Though he came to office on a wave of popular support, Mugabe’s tenure as prime minister, and then as president, was defined by a stubborn determination to hold on to power – an end to which he sacrificed Zimbabwe’s economy, institutions, and society.

Throughout his presidency, general elections were marred by spikes in serious human rights violations and abuses by state security agents and ZANU-PF activists. Opposition supporters suffered torture, harassment, intimidation and even death. Some were disappeared without a trace.
In 2008, following his first-round ballot loss to the Movement for Democratic Change (MDC) candidate Morgan Tsvangirai, the army unleashed a wave of violence in which more than 300 people were killed and thousands injured or tortured on suspicion of having voted for the opposition. The response saw opposition MDC leader, Morgan Tsvangirai, withdrawing from the second round of voting.

Again, Amnesty International called for the crimes to be investigated. Again, the call went unheeded.

“Whenever Mugabe felt under pressure he defaulted to sanctioning human rights violations, publicly defending the actions of his officials’,” said Muleya Mwananyanda.

The early progress made by Mugabe’s government on economic, social and cultural rights was wiped out by a series of disastrous government policy decisions.

In 2000, Mugabe sanctioned a violent land reform programme, ostensibly to redress skewed land distribution resulting from 90 years of colonial rule.  While the need for land reform was legitimate, Mugabe used the redistribution programme as a system of patronage, rewarding his supporters with land while denying those considered political opponents. The programme was also used as a front to disguise the violent targeting of farm workers who had supported the opposition.

In 2005 Mugabe presided over one of the most disastrous forced eviction campaigns in African history. Known as Operation Murambatsvina – a Shona word meaning “drive out trash” – it targeted urban shack dwellers. The United Nations estimated that 700,000 people had their homes, livelihoods, or both, destroyed.  The evictions drove most of the affected people deeper into poverty, with many continuing to live without access to health, education and other basic services.

An increasing reliance on his security services to suppress dissenting voices within and outside his party became a hallmark of the latter years of his rule. Opponents including human rights defenders, journalists and opposition party activists were locked up on politically motivated charges or under draconian laws. The less fortunate were killed. Mugabe was also uncompromising in his opposition to LGBT rights, saying that they were “worse than dogs and pigs”, and favoured more anti-homosexual legislation.

Escaping repression and a shrinking economy, an estimated three million Zimbabweans have left the country since 2000.

Finally forced to resign in November 2017, his long-time lieutenant Emmerson Mnangagwa – later his political rival in the jostling for the control of Zimbabwe with the ruling ZANU-PF – engineered his exit from the presidency with the backing of the army.

“Mugabe leaves behind permanent scars of his brutal rule. Going forward, those who come after him must forge a national healing programme, beginning with accountability for the past human rights violations. Zimbabweans deserve the truth,” said Muleya Mwananyanda.