Robert Mugabe, in Speech to Zimbabwe, Refuses to Say if He Will Resign 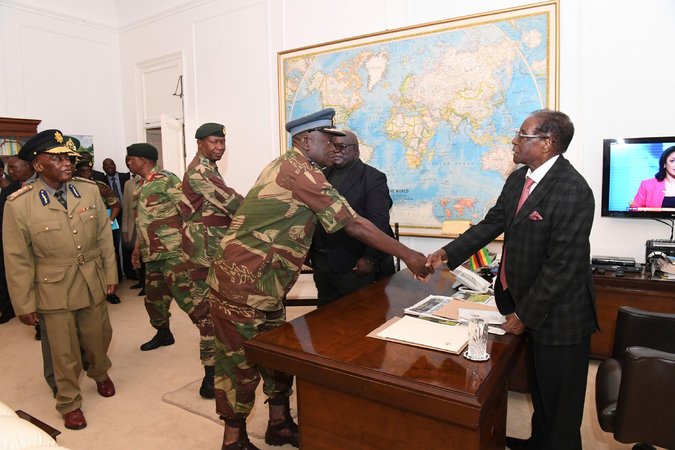 Source: Robert Mugabe, in Speech to Zimbabwe, Refuses to Say if He Will Resign – The New York Times

HARARE, Zimbabwe — Robert Mugabe, 93, who ruled Zimbabwe with an iron grip until the military placed him under house arrest last week, shocked the nation on Sunday night by refusing to say whether he would resign.

Many political observers and fellow Zimbabweans had been expecting Mr. Mugabe to step down as president after nearly 40 years in power. But the embattled president gave a 20-minute televised speech that acknowledged problems in the nation — and he vowed to soldier on.

“The era of victimization and arbitrary decisions” must end, Mr. Mugabe said while sitting at a table, flanked by members of the military and other officials, including a priest.

He also declared that he would oversee his governing party’s congress in a few weeks. “I will preside over its processes, which must not be prepossessed by any acts calculated to undermine it or to compromise the outcomes in the eyes of the public,” he said.

Observers questioned how Mr. Mugabe could oversee the congress if he was no longer leader of the party: His address came hours after he was expelled as leader of his party, ZANU-PF, which gave him until noon on Monday to resign or face impeachment by Parliament.

Party officials earlier on Sunday also removed his wife, Grace Mugabe, as head of the ZANU-PF Women’s League and barred her from the party for life. So were Jonathan Moyo, Zimbabwe’s minister of higher and tertiary education; and Saviour Kasukuwere, the minister of local government. Mr. Mugabe’s second vice president, Phelekezela Mphoko, who had served for three years, was fired.

Mrs. Mugabe, who had amassed wealth and power in the party and was her husband’s likely successor, has not been seen in public since Wednesday.

ZANU-PF appointed her rival, Emmerson Mnangagwa, the vice presidentpreviously fired by the president, to take Mr. Mugabe’s place as leader of the party.

The harsh rebuke by the party’s central committee came after emergency talks to address the political crisis. Under the Constitution, Mr. Mugabe remains president despite the party’s expulsion.

Announcing the decision on Sunday, Patrick Chinamasa, the party’s secretary for legal affairs, said that Mr. Mugabe “hereby is recalled as first secretary and president of the ZANU-PF party.”

“He is therefore asked to resign forthwith,” Mr. Chinamasa said. “In the event that the resignation would not have been tendered by midday 20th of November, 2017, the ZANU-PF chief whip was ordered to issue proceedings for the removal of the president.”

Cheers and dancing broke out in the building after the decision to expel Mr. Mugabe as party leader.

“There is a case at the end!” a group of youths chanted after storming an open space outside ZANU-PF headquarters.

Many Western news outlets had alerted the world to a pending resignation, citing confidential sources. But it was not to be — at least in the speech on Sunday night.

Mr. Mugabe made the rambling address to the southern African nation about 9 p.m. local time after intense negotiations at the State House with army generals over the conditions for his departure, the state broadcaster reported.

Among the men sitting off to the side during Mr. Mugabe’s speech was Constantino Chiwenga, the very army commander who had placed him under house arrest. Mr. Mugabe spoke haltingly but deliberately, sometimes repeating phrases and appearing to lose his place among the pages before him. He alluded to the military takeover and his talks with the generals.

“I, as the president of Zimbabwe and their commander in chief, do acknowledge the issues they have drawn my attention to,” he said, “and do believe that these were raised in the spirit of honesty and out of deep and patriotic concern for the stability for our nation and for the welfare of our people.”

Among the issues discussed was the economy, which, Mr. Mugabe allowed, was “going through a difficult patch.” He later said the government would unveil business and entrepreneurial programs to help the economy.

“Today’s meeting with the command element has underscored the need for us to collectively start processes that return our nation to normalcy,” he said, “so all our people can go about their business unhindered, in an environment of perfect peace and security.”

As his speech came to a close, he invoked a “wartime mantra.” He then said, “I thank you, and good night.” Then he shook the hands of the men who had appeared on camera with him.

Some Zimbabweans reacted to the speech with disgust. Trevor Ncube, an entrepreneur and newspaper publisher, said on Twitter: “Robert is finished,” adding, “He is likely to be impeached. Worst speech ever.”

On Saturday, thousands of Zimbabweans took to the streets to celebrate the autocratic leader’s apparent downfall after the military seized control on Wednesday but was careful not to call it a coup. The military said it wanted to target the criminals around Mr. Mugabe who had pillaged the country’s economy.

Once respected as a liberation icon who went into exile after fighting colonial rule, Mr. Mugabe had become isolated from fellow party officials. Zimbabwe’s only leader since the country gained independence from Britain in 1980, he had faced little opposition from the party rank and file.

But on Saturday, even his fellow veterans of the fight for independence joined the march of tens of thousands of Zimbabweans who danced and sang with joy at the prospect of Mr. Mugabe’s tenure ending.

On Sunday, Mr. Mugabe met for a second round of talks with the generals to negotiate a dignified departure, the state-run broadcaster said. A Catholic priest, Fidelis Mukonori, mediated.

Last week, a majority of the party’s leaders recommended that Mr. Mugabeshould be expelled. In a resolution, they said he should be removed for taking the advice of “counterrevolutionaries and agents of neo-imperialism”; for mistreating his vice president, Mr. Mnangagwa; and for encouraging “factionalism.”

They urged the “immediate and unconditional reinstatement” of Mr. Mnangagwa, at least until the national elections scheduled for next year. On Sunday, the leaders put force behind their recommendations.

The party elevated Mr. Mnangagwa, 75, to the role of party leader and nominated him as its sole presidential candidate for the 2018 elections — a position that the committee said would be confirmed by the party’s congress in December.

Mr. Mnangagwa’s firing had positioned Mr. Mugabe’s wife to succeed him as president, but it appears to have been an overreach that singled out an erstwhile ally with strong support from the military.

The vice president, however, is seen as no salve for a nation facing steep unemployment and crumbling public infrastructure. Critics accuse him of being politically ruthless. He is also unpopular in parts of the country.

He lost his parliamentary seat at least twice, once after being accused of firebombing his opponent’s house, according to an editor of The Zimbabwean newspaper.