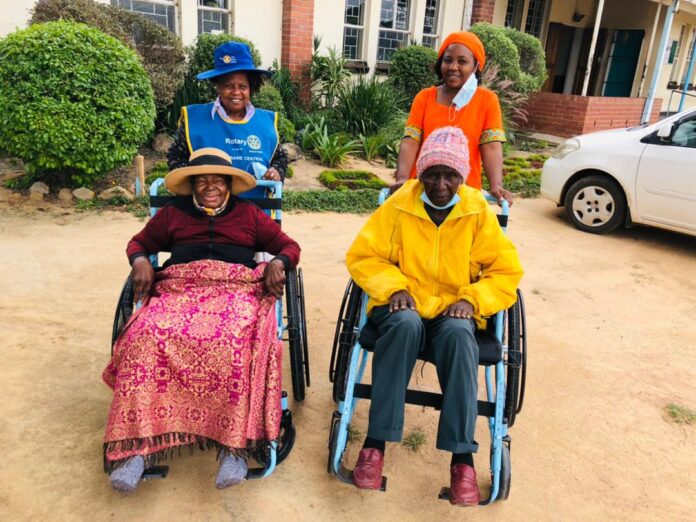 BY STAFF REPORTER
The Rotary Club of Harare Central on Saturday donated 20 wheelchairs to people with disabilities (PWDs) at St Agness Catholic Church in Chitungwiza.

Rotary Club for Harare Central president Rutendo Mawoyo told NewsDay that the donation shows the club’s commitment to assist those in need.

“It came to our attention that there is a nationwide need for wheelchairs. We learnt that there are 5 million PWDs and among them, some are in need of wheelchairs. This programme started in 2017 and this year, we have donated 448 wheelchairs in nine provinces,” he said.

“We made our first donation in Bulawayo last October and then moved to Harare, Norton, Victoria Falls, Chegutu, Chinhoyi, Marondera, Mutare, Bindura and Mutoko. We are going are left with donating 40 wheelchairs to Masvingo province,”

Some of the beneficiaries include an elderly couple with renal problem, Onias Zimano (84) and Letwin Zimano (77).

“I am happy because I couldn’t walk. I am still in shock and humbled by what God has done for me. I started having a backache in 2013,” Zimano said. “In addition to backache, I also have prostate cancer. I also have renal failure just like my wife.”

“I am grateful for the gesture because now it is easier to take care of my parents. All along, my mother was always bed-ridden. But with this wheelchair,she is now mobile,” she said.

Another beneficiary, a minor, Peace Chifamba from Ngoma area in Seke rural, who dropped out of school because his parents can’t afford sending him to a special needs school.

“This must be God who sent you to make this donation. My son had dropped out of school because I could not carry him to and from Ngome Primary School every day. I can’t afford to send him to St Giles who demanded that I should pay US$400 per term. With this wheelchair, my son can resume classes. It is never too late,” his mother Francisca Chiduku said.