In a country where hospitals are not functioning, civil servants are paid paltry amounts and children are dropping out of schools it becomes ironic for any government to be prioritizing outsourcing teargas. 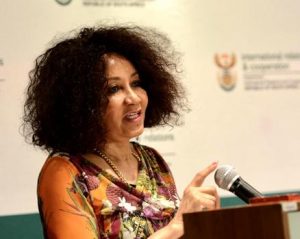 It boggles the mind how a Minister Sisulu decided a donation to a death squad. Even the statements she made at the handover ceremony are suspicious. “The package that comes from myself is to assist through you minister in the training of the police and in making sure that they have the necessary protective gear to make sure they are equipped. We have realized they are very busy,” she said.

There is an insinuation to the effect that the citizen is troublesome therefore the police must be equipped to fight them. The past few months have seen close to 30 lives being lost at the hands of both the military and the police.

Today Abel Toronga was found dead in a mortuary in Chitungwiza after an abduction which took place in Highfield on 24 January 2019.

Police did not do anything to investigate his whereabouts, even when he was found, no details were shared. They have reneged from the stipulated conduct provided in section 208 of the Constitution and calls to set up an independent complains mechanism provided in section 210 have fallen on deaf ears.

The point we make is that if there is any funds required, they must focus on reform of law enforcement institutions.

There must be training on respect and protection of the exercise of human rights, the word “busy” for now has been on an unconstitutional attempt to take the rights away and violate the people’s rights.

We also make the point that teargas cannot be front and centre when Parirenyatwa Group of Hospitals has no painkillers.