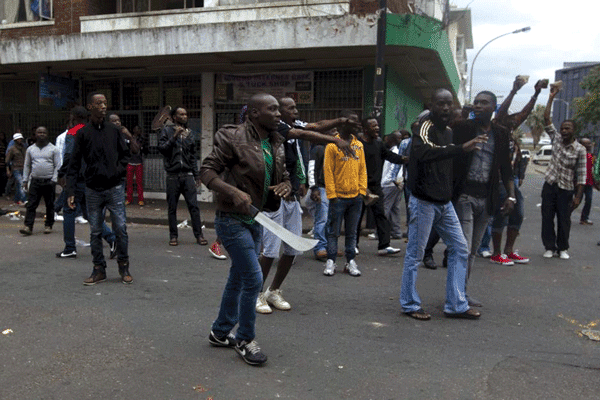 IN the 1980s, a jingle played regularly on Zimbabwe Broadcasting Corporation’s Radio 2, that went something like this: MuAfrica, kwayedza. Kwasara mbiri chete kuti ichibva yakwana. Kunoti Azania, neNamibia (Africa is rising, only two more for it to be completely free; Azania and Namibia.)

At the time, South Africa and Namibia were under the heavy yoke of the apartheid regime. This ended with independence in 1990 for Namibia and for South Africa, with the election of Nelson Mandela as the first democratically elected President in 1994.

The jingle, of course, spoke of the aspirations of the rest of Africa that the two countries be free for a united Africa to realise its potential. Given the failure of most African economies, South Africa’s far more developed economy became the destination for many Africans seeking entrepreneurial and job opportunities.

But South Africans have not always taken kindly to the presence of their more educated and technically gifted, but often cheaper cousins escaping poverty at home as the local economy fails to meet their own aspirations and demands.

A new wave of attacks on foreigners in South Africa, which has left five people dead and scores injured as of Tuesday, is testament to their frustration as xenophobia once again reared its ugly head in this “rainbow
nation.”

This is also in part due to the failure of leadership in that country and a reluctance to effectively deal with the scourge.

Over the last few years, remarks by some of Africa’s biggest economy leaders have shown an unwillingness to embrace fellow Africans, only blaming them for their failings. There is a dangerous emerging trend of xenophobic populism, starting with Zulu king Goodwill Zwelithini’s speech in 2015, President Cyril Ramaphosa’s 2019 election campaign pronouncements and the Health minister’s comments on the alleged strain placed
on health services by foreign migrants.

Because all these leaders have used political populism to justify instigators and perpetrators of xenophobic violence, it is not surprising that such attacks have become commonplace in South Africa. This makes the recent remarks by Ramaphosa that they would clamp down on what he described as “acts of wanton violence” find very few takers among many Africans whose only crime has been to settle in South Africa.

If the South African government was sincere, it would have dealt with previous cases of xenophobia with a firm hand and put an end to it all, but the constant recurrence is proof that Ramaphosa is just a two-faced politician trying to blame his own leadership failures on the hordes of African nationals who have settled in that country.

It is quite sad that many South Africans, particularly those instigating the violence, either have no memory or conveniently choose to forget the role played by neighbouring countries in their fight for freedom.
Such assistance in their fight against apartheid proved an African oneness that needs to be cherished even today. Many South Africans were housed in other southern African countries during their fight for freedom, which makes it tragic to then turn around and label nationals from those very countries foreigners who should not find respite in South Africa, as their own nations are now in flames.

As Ramaphosa has promised to convene the security ministers cluster to find ways of stopping these acts of wanton violence, we hope all perpetrators of the violence will be dealt with according to the law and the victims compensated for their losses. There is really no justification whatsoever for South Africans to attack people from other countries. They now carry the label of a xenophobic people, with no appreciation for the symbiotic ties that bind African nations together.

The defence of a country’s sovereignty has nothing to do with attacking and killing foreigners living and working among you legally. That is a warped perception of sovereignty that leads citizens to carry out such heinous attacks, with no compunction whatsoever. This problem must be dealt with effectively once and for all.