South African police have intercepted a Zimbabwean bus transporting nine border jumpers and an assortment of smuggled goods worth R175 800 as they clamp down on smuggling.

The Johannesburg-bound bus was busted on Thursday in Polokwane during routine police patrols.

Limpopo police spokesperson Brigadier Motlafela Mojapelo said the Zimbabwean bus driver had been arrested along with the undocumented migrants.

He said the bus had since been impounded while the goods were seized pending further investigations.

“It was transporting undocumented foreign nationals and undeclared goods in the form of alcohol and travelling along the N1 north on the outskirts of Polokwane City.

“The (SAPS) members were on routine duties along the N1 road next to the South African Breweries when they stopped a bus with a trailer”. 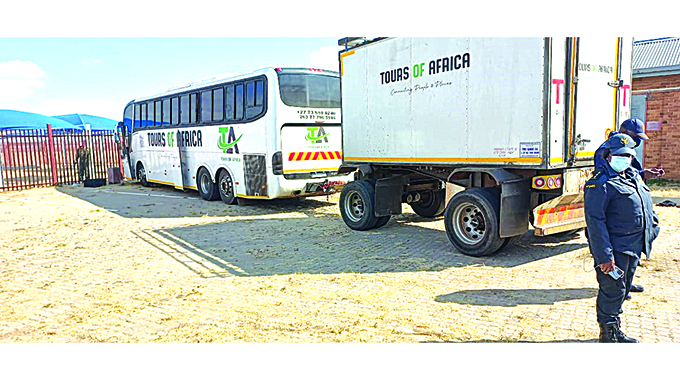 He said the nine border jumpers were arrested for contravening sections of the Immigration Act as they failed to produce valid travel documents.

Brig Mojapelo said a further search of the bus led to the discovery of Chibuku Super loaded in its trailer.

“A 31-year-old driver, who is also a foreign national was immediately arrested. Preliminary police investigations revealed that the alcohol and the undocumented foreign nationals were being transported to Johannesburg, Gauteng Province,” he said.

He said the goods and the bus were taken back to Beitbridge Border Post for further management.

Cases of contravention of regulations under the Disaster Management Act and Immigration Act have since been opened.

The incident comes a few days after security authorities in South Africa intercepted smugglers with cigarettes worth R12 million on three different occasions.

On Friday last week, a contraband of cigarettes worth R3 million was seized by the police at Beitbridge Border Post while being smuggled in a bus travelling from Zimbabwe.

Two days earlier, South Africa’s National Defence Force soldiers had busted smugglers with another contraband worth R2 million in the Madimbo area which is adjacent to Tshikwalakwala some 140km east of the Beitbridge Border Post.