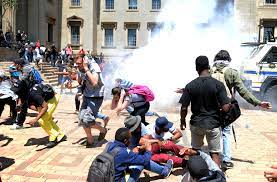 THE manufacturing sector is in disarray following violent clashes in South Africa in recent weeks, which have affected the supply of critical raw materials.

The Confederation of Zimbabwe Industries (CZI), in a new report titled Impact of Disturbances in South Africa, says the torching of trucks and barricading of roads in the neighbouring country have crippled the supply chain locally.

The unrest in South Africa was triggered by the jailing of that country’s former president Jacob Zuma for contempt of court on July 8.

As a result, there were days of riots and looting in parts of South Africa leading to more than 330 deaths.

The South African authorities have managed to quell the protests following deployment of over 10 000 soldiers to KwaZulu-Natal and Gauteng provinces.

“Majority of our imports come from South Africa, including critical raw materials. Torching of trucks and closing of roads is resulting in supply chain disruptions. There have been delays in the movement of cargo and, in some instances, a complete shutdown,” reads the CZI report released on Monday.

Production will be greatly affected in Zimbabwe because our companies depend heavily on South Africa for raw materials. A trade dimensions study on the impact of Covid-19 done by CZI in 2020 highlights the exposure of local firms to imported raw materials.

According to the study, 58% of imported raw materials come from South Africa.

“If we exclude fuel, electricity and machinery from our imports, South Africa accounts for almost 80% of our imports.”

CZI said that companies were running down their reserved stock of raw materials while the unrest continued in South Africa.

“If the situation in South Africa does not change soon, our economy will be significantly affected. Shortages of goods in shops will be witnessed as production starts to fall due to shortages of raw materials and prices will skyrocket,” CZI said.

“Prices of goods are likely to go up in South Africa due to these disturbances and it will result in imported inflation for Zimbabwe.”

The most affected raw materials are from the following sectors: agriculture and horticulture; foodstuffs; drink, tobacco and beverages sector; chemical and petroleum products; clothing and footwear; construction; metal and metal products; and non-metallic mineral products.

Others include hotel and catering services; distribution — wholesale/ retail/ commodity broking; packaging; pharmaceutical and medicinal products; and wood and furniture.

In the short-term, CZI said the unrest would result in the delayed delivery of imports, high risk of merchandise being lost in transit and demurrage charges.

Concerning the long-term, importers could face stock outs, decreased production and capacity utilisation, loss of revenue, high risk of moving cargo resulting in increased logistical costs, and costs of shifting to other ports. These other ports would be Beira in Mozambique and Walvis Bay in Namibia.

Exporters would also not be spared from the unrest in South Africa.

“With malls being ransacked and other companies being forced to shut down, demand for our exports will be negatively affected. It is also a route for our exports, destined for other countries. With trucks being looted and torched, it will be risky to transport cargo through South Africa.

The short-term impact for exporters would include the incapacitation of the Durban corridor, thus affecting the movement of exports as well as storage and demurrage costs. Also, there would be increased risk on customers who purchase merchandise on a free-on-board basis.

Concerning the long-term impact for exporters, the research pointed to the inability to dispatch goods and the collapse of markets as a result.

CZI added that exporters could face a disruption of distributors in South Africa which may delay repeat orders and export customers failing to recover from a loss of business from the unrest.

“Loss of business is a bigger threat for transporters, as some companies are being forced to close and those that are operating are withholding their cargo due to the high risk. Some transporters are deliberately not releasing their trucks due to fear of them being torched, which will result in shortages of trucks to transport goods,” CZI said.

“Beitbridge border post, one of the busiest border posts in Sadc will experience a decrease in flow of trucks in and out of South Africa, which affect transporters revenue and may result in loss of employment.”

CZI suggested that in order to mitigate against potential shocks, importers must increase local manufacturing where possible.

This must be followed by implementing of import substitution and promoting the “Buy Zimbabwe” initiative, diversify sources of raw materials, procure raw materials from other Sadc nations, and create dry ports since the country is landlocked.