Maputo (AIM) – The one-day extraordinary summit of the “Double Troika” of the Southern African Development Community (SADC) ended in Maputo on Thursday, without announcing any decisions other than plans to hold further meetings at the end of the month. 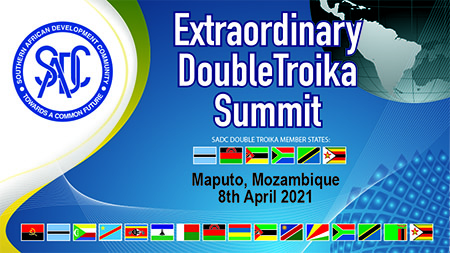 The summit was called in the wake of the terrorist attack of 24 March against the town of Palma in the northern Mozambican province of Cabo Delgado, but the leaders did not pledge any immediate practical support for Mozambique.

The final communiqué from the summit condemned the terrorist attacks “in the strongest terms” and declared that “such heinous attacks cannot be allowed to continue without a proportionate regional response”. But it did not suggest what such a regional response might consist of.

The Summit expressed “SADC’s full solidarity with the government and people of Mozambique” and reaffirmed “SADC’s continued commitment to contribute towards the efforts to bring about lasting peace and security, as well as reconciliation and development in the Republic of Mozambique”.

The summit ordered “an immediate technical deployment” to Mozambique, and “the convening of an Extraordinary Meeting of the Ministerial Committee of the Organ by 28 April 2021 that will report to the Extraordinary Organ Troika summit on 29 April 2021”.

The extremely brief communiqué mentioned no other specific measures