Zimbabwe yesterday joined SADC in witnessing the commissioning of a state of the art Kazungula bridge that links Botswana, Zambia and Africa’s hinterland in a development that will enhance intra-regional trade and cooperation.

Zimbabwe, in the fullness of time, will be part of the project after pledging to pay its share of the bridge having been left out due to a diplomatic standoff before the dawn of the Second Republic.

Although the $260 million Kazungula bridge presently links Zambia and Botswana, the two nations have agreed to rope in Zimbabwe as the region moves to improve trade and commerce through interlinking countries that faced difficulties because of infrastructural bottlenecks.

The completion of the project gives impetus to SADC’s Regional Development Master Plan — Vision 2027 — which envisions well-maintained and operated infrastructure that promotes seamless transport services in the region.

Apart from that, the bridge fits into intra-regional and continental ideals encapsulated in the Africa Agenda 2063 of a more integrated, united, and prosperous continent.

Addressing the gathering on the Zambian side of the border, President Mnangagwa said the commissioning of the bridge comes at a critical juncture when the region is moving towards integration and from being landlocked to landlinked.

“This is indeed a milestone achievement in our region. I wish to sincerely thank my dear brothers and colleagues, His Excellency President of Botswana Masisi, and your Excellency President of Zambia, Cde Edgar Lungu, who extended an invitation to Zimbabwe to be part of this grand project. In the fullness of time Zimbabwe will be part of this project to accelerate our regional integration. My country continues to harness and modernise serious infrastructural development projects to enhance efficient connection with Botswana and Zambia. 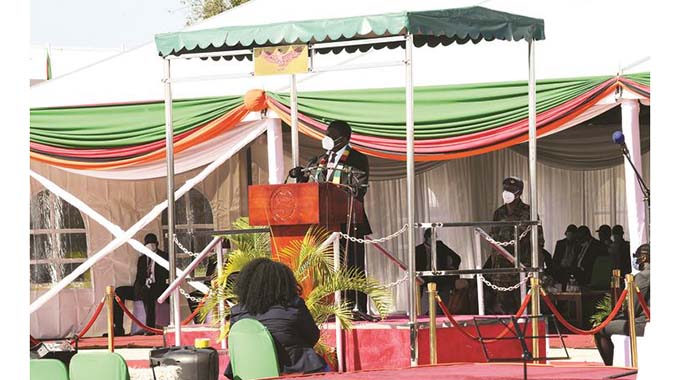 “The completion of the Kazungula bridge is therefore timely. I reiterate Zimbabwe’s commitment to be part of this project for the benefit of our SADC region,” he said.

As part of efforts to benefit from the new bridge, Zimbabwe has already started upgrading the Victoria Falls-Kasane highway. This is on top of other development projects that the Second Republic is conducting locally, which include the US$300 million project to expand Beitbridge Border Post as well as the upgrading the Beitbridge-Chirundu highway to the tune of US$250 million.

The Kingdom of Eswatini was represented by acting Prime Minister Senator Themba Masuku while Namibian second vice president Dr Nangolo Mbumba was also in attendance to witness the official opening of the road-rail bridge that will ease freight movement and help decongest other ports of entry in the region.

The 923-metre road and rail bridge offers yet another passageway for the south to north corridor, adding to the already existing Beitbridge outlet.

As well as increasing regional trade, Zimbabwe seeks to consolidate its strategic position as the regional trade hub and improve interpersonal communication.

President Mnangagwa, when he assumed power in 2017, sought to build bridges with all nations culminating in the inclusion of Zimbabwe in the project to make it a tri-national conduit that will ease the flow of transportation and freight. 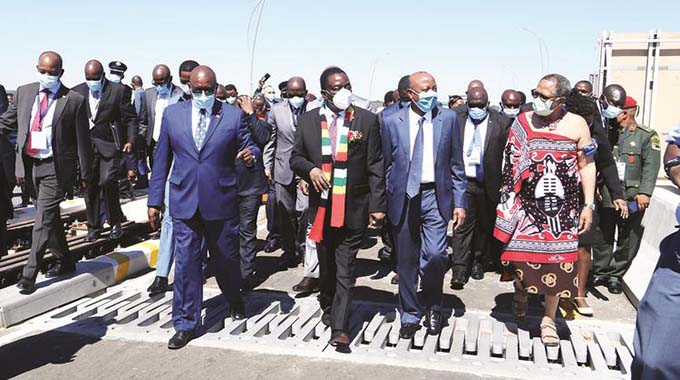 President Mnangagwa and his compatriots take a walk on the US260 million Kazungula rail road bridge that is set to ease traffic flow in the region as well as enhance trade.-Pictures: Presidential Photographer Joseph Nyadzayo

Contrary to untested and unfounded claims from some quarters that Zimbabwe will lose out, the country is better placed, geographically and in terms of distance to be the route of choice for freight from the south to the north, as the distance that cuts through Zimbabwe, from Beitbridge to Chirundu is 200km shorter.

Speaking on the same occasion Botswana President Masisi said Zimbabwe was included in the project in the spirit of integrating the region and invited Namibia to be part of the project.

“I am happy to note that the Republic of Zimbabwe and ourselves with Zambia have agreed in principle to be a partner in this project and our officials are working and will work increasingly faster and harder to complete the remaining works for Zimbabwe,” he said.

The commissioning of the bridge comes at a time when the Second Republic is carrying out massive infrastructural development projects including the dualisation of the Harare Beitbridge-Chirundu highway.

This is in line with the country’s five-year economic blueprint the National Development Strategy 1 which prioritises infrastructure development as a sine qua non of economic recovery and growth.

The multi-million bridge comprises a bridge across the Zambezi River, and one border post for the two country’s sides. Construction started in 2014.