Nurses at Sally Mugabe Central Hospital have publicly broken with the Zimbabwe Nurses Association (Zina), resolved to resume normal shifts and most have apologised to the Government for disruptions in service delivery caused by protracted industrial action, with Mpilo and Parirenyatwa hospitals reporting full turn-out of staff.

But even the 90 who are yet to apologise have resumed work on normal shifts, so the hospital has a full staff complement.

The meeting was held at the hospital where the nurses said they had started working the 40-hour week in shifts in line with a Government directive. 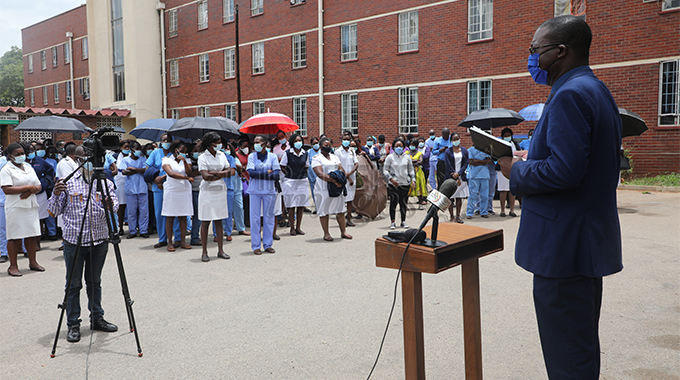 They said they would snub a call by Zina to continue with the “flexi-hours” arrangement where nurses worked sharply reduced hours.

Zina is insisting on nurses working reduced hours, a move which has disrupted services at major hospitals and proved unsustainable, especially in the middle of the global Covid-19 pandemic.

HSB removed 1 032 nurses who were not working normal shifts from its pay sheets and those affected have shown remorse and apologised.

A number of the affected staff have inundated the Ministry of Health and Child Care with letters of apology, and by yesterday 458 of the 548 affected nurses at Sally Mugabe Central Hospital had formally apologised, including some Zina executive members stationed at the hospital.

Even the 90 yet to formally apologise have since resumed normal duties, meaning all the 1 200 nurses employed at Sally Mugabe Central Hospital are back at work.

“We want to apologise for what has happened. We are not enemies of the State. We are committed to an amicable resolution to problems and we thank you for coming,” said Mr Makwavarara.

“We want to apologise for not following the directive given by the Permanent Secretary of Health and Child Care. 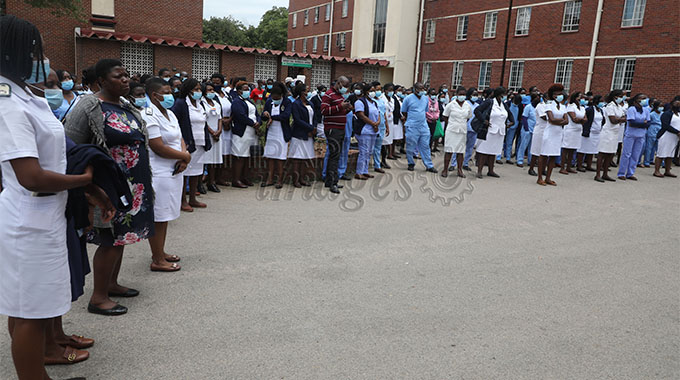 “We have since returned to normal duty rosters and everyone is reporting for duty normally despite the fact that some have not received the salaries for November,” said Sr Dingo.

Another nurse said: “We do not know who Zina is representing. All we wanted was an improvement of salaries and conditions of work. We are against this idea of taking the Government to court to push for flexi-hours. We don’t know where it is coming from and they are not representing us.”

“We have 1 200 nurses here and all of them have returned to normal duty rosters. They are working 40 hours a week as prescribed by authorities. This has helped improve our operations here, and we are now doing all clinical services which we are supposed to be doing,” said Dr Pasi.

Acting chief executive at Mpilo Professor Solwayo Ngwenya recently told The Herald that there was a marked improvement in service following the cancellation of the flexi-hours package and now all those expected on duty were now coming to work.

Professor Murwira told nurses gathered at Sally Mugabe Central Hospital that he would take their concerns further and he told them to expect positive feedback from the Government.

“We are taking your issue further and what I can say for now is that expect positive feedback. The nurses who were initially not reporting for duty wrote letters to us apologising and they requested us to come here and we agreed.

“They said they are not interested in the warring and I am happy they are doing their work. Now we are taking their issue further and these issues can be corrected,” said Professor Murwira.

Nurses went on strike on June 18 demanding higher salaries and allowances, better working conditions and personal protective equipment to protect them from the Covid-19 pandemic.

The industrial action ended in September after which nurses were working reduced hours.