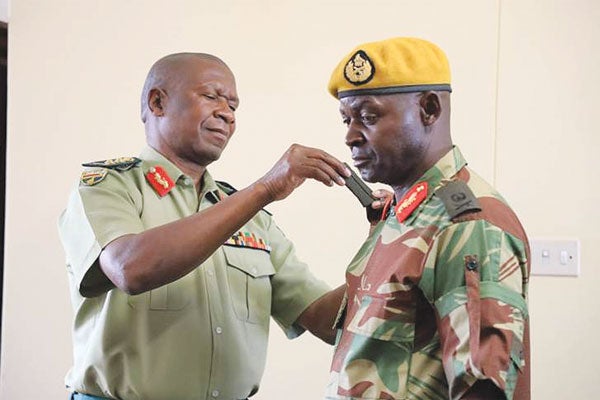 FORMER head of the Presidential Guard, Anselem Nhamo Sanyatwe, yesterday finally handed over the reins of the powerful brigade to his successor Brigadier-General Fidelis Mhonda three months after he was moved, amid reports that he is yet to be retired from the army despite the announcement in February.

Sanyatwe, now a Lieutenant-General, is set to take up his new role as Zimbabwe’s ambassador to Tanzania.

He was among 16 new ambassadors deployed to various countries yesterday.

In February this year, President Emmerson Mnangagwa retired four senior army commanders, among them Sanyatwe, and deployed them to the Foreign Affairs ministry.

However, circumstances surrounding the redeployment were a subject of speculation following allegations of a fall-out between Mnangagwa and Vice-President Constantino Chiwenga over the top commanders’ retirement.

Sanyatwe yesterday thanked his troops for standing with him and for being a disciplined force.

“I am very pleased this morning and I feel greatly humbled to stand before you officers, men and women of this formation to officially hand over the brigade to Brigadier-General Fidelis Mhonda; a brigade, Presidential Guard brigade, that is intact, formidable, highly trained and loyal to the Commander-in-Chief and our great nation as a whole as per all the standards expected of the guards,” he said.

Sanyatwe, however, urged the incoming commander, Mhonda, to keep the soldiers busy to avoid mischief.

“In this regard, Commander Zimbabwe National Army, all members on the parade before you and others who are manning essential services throughout the country are soldiers of unquestionable loyalty whose devotion to duty is intrinsically driven.

“They are, indeed, the paragon of efficiency who, of course, must be kept busy at all times for obvious reasons.”

Sanyatwe urged the incoming commander to continue maintaining the standards at the brigade, while urging the troops not to be carried away by social media propaganda.

“You must not be carried away by social media propaganda, disinformation and subversion. I urge you the guards to remain loyal, disciplined, resolute, focused and guided by the directive from the Commander Zimbabwe National Army.

“I also urge you to strongly support the incoming commander,” he said.

Following widespread condemnation, Sanyatwe fiercely defended the brigade’s use of brute force to quell the violence when he appeared before the Kgalema Motlanthe-led commission of inquiry into the shootings.