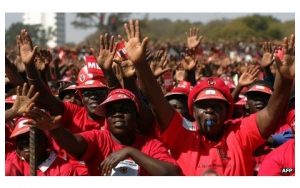 The police had to be called to restore order as party youths clashed along factional battles at Jazire Shopping Centre in Rujeko Suburb.

A party official told ZimEye.com yesterday, the youths clashed on who to choose as the party candidate for Masvingo Urban Constituency in the coming elections.

Some youths are aligned to Takanai Mureyi while others are behind former MP, Tongai Matutu.

“The lack to tolerance has reached unprecedented levels. I think we have to learn to tolerate diverse views in the party.

I was called by one of our members and I rushed to the shopping centre where I found party youths fighting among themselves,” said the official.

The police also arrested several party youths said to be behind the violent clashes.