Government is committed to strengthening the operations of the security services sector to ensure it is technologically abreast with international standards, President Mnangagwa has said.

In a speech read on his behalf by Acting President Kembo Mohadi yesterday at the 2019 Presidential Medal Shoot prize presentation ceremony, the Commander-in-Chief of the Zimbabwe Defence Forces said under the New Dispensation, it was vital for the security sector to keep abreast with technology in this era of a “hyper-connected global community”.

“We need to ensure that the entire gamut of the national security architecture from defence, law enforcement, intelligence and correctional services keep pace and are better equipped with modern tools and skilled personnel.

“In a hyper-connected global community, there are threats and risks which have the capacity to shape our national security landscape. In that regard, testing the preparedness of security services, especially their skills, proficiency and team work is paramount.”

He said Government was making efforts in rebuilding the economy and urged people to unite and work together for common cause, rather than waging violence.

“Certainly, violent demonstrations will never unite us or solve the transient challenges confronting our motherland, but will only serve to divide us and lead to unnecessary destruction of property, injury and loss of lives,” said President Mnangagwa. 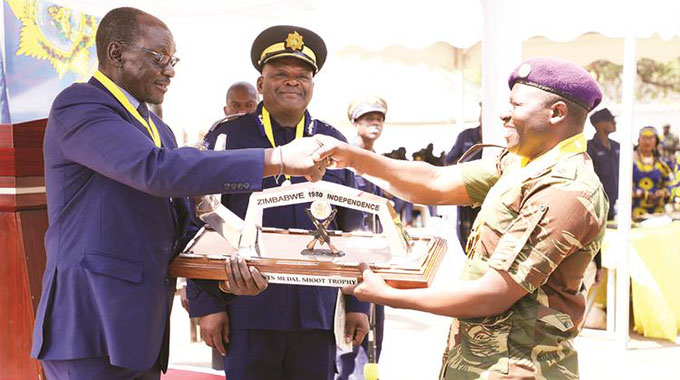 “Once again, I reiterate that my arms are wide stretched for those that wish to pursue the path of dialogue and unity. Hence working together and in common purpose, we can certainly guarantee that our country leapfrogs many in all facets of socio-economic and political development.”

Speaking at the same occasion, police Commissioner-General Tandabantu Godwin Matanga said the security services was committed to the provision of world class safety and security services to all its citizenry and all those pursuing various economic activities.

He said the shooting competition was vital in sharpening their expertise in the protection of the VIPs and VVIPs, public order management, counter insurgency and reconnaissance operations.

Over 50 participants were awarded with cash prizes, medals and trophies in different categories.

The overall champion of this year’s competition was Lieutenant John Chindito, who is also a chaplain at 4 Brigade headquarters.