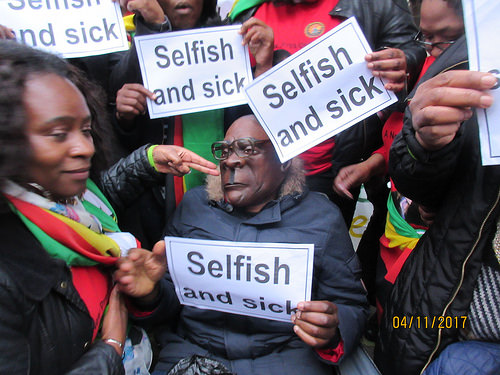 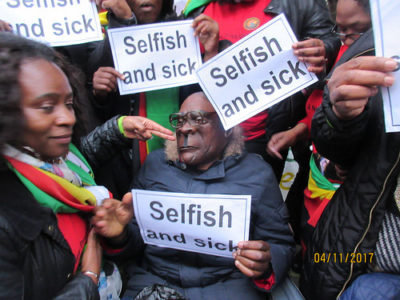 The allegation was outrageous. ‘Selfish?’ – the man who devotes both waking hours of the day entirely to our beloved country! If he was selfish would he still be criss-crossing the world every month on our behalf given his vast age and even vaster wealth? Surely he could be resting quietly in one of his numerous palatial mansions in South Africa, Hong Kong, Dubai and elsewhere.

And if he really is ill how could he possibly be making plans for the 94 ton cake to celebrate his birthday in February? Indeed, how could he aspire to eat so much cake if he was even slightly off his food?

Being selfish and sick is apparently only one of the accusations for which 25-year-old Martha O’Donovan was arrested in a dawn raid on her home in Harare. Some reports say she also retweeted something about the President being a goblin. But his goblinity is not in dispute, as ousted Vice-President Mujuru has made it clear that Mugabe has confessed to this anyway.

Nevertheless, former minister David Coltart, a human rights lawyer, says Ms O’Donovan of Magamba TV could be in big trouble. He says she could be facing a 20-year sentence for seeking to subvert constitutional government. She obviously did not twig on that Zimbabwe is now in a cyber war – any criticism of the government can be treason.

The Vigil appeals for clemency for this poor young woman. But we wouldn’t be surprised if the government doesn’t take action against the United States which, under cover of sanctions, has for a long time been sabotaging Zimbabwe by refusing to give us dollars, causing these endless queues you see everywhere.

As we dispersed at the end of the Vigil, we heard that Grace Mugabe had received the same sort of reception we gave her husband. Speaking at a rally in Bulawayo, she was booed by a section of the crowd who chanted ‘oyenzayo siyaizonda’ (‘we hate what you do’). Mugabe himself, sitting within backstabbing distance of Mujuru’s successor, Emmerson Mnangagwa. again took the opportunity to denigrate the Vice-President (see: https://citizen.co.za/news/news-africa/1583073/zimbabwe-politics-mugabe/).

FOR THE RECORD: 57 signed the register.