Separation of the Constitutional Court and the Supreme Court

Source: Separation of the Constitutional Court and the Supreme Court – The Zimbabwean

Community issues may remain within the community and unattended to in the absence of the media. 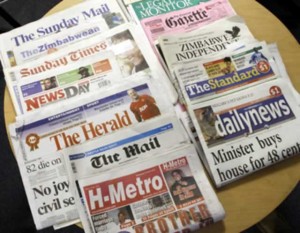 The day to day social, political and economic problems which in turn affect full enjoyment of human rights communities can only be addressed if journalists amplify the voices of the affected on television, radio, newspapers as well as social media.

Media, therefore, becomes the backbone of a healthy democracy by educating communities on their rights, exposing human rights violations and advocating for recognition of human rights.

Journalists have an overall mandate of educating their audience. On issues of human rights awareness, journalism is central.

With a wide reach through their many mediums from print to electronic to digital the media becomes the most important essential tool in ensuring that people on different platforms are made aware of their human rights.

For example during the election period, journalists work tirelessly to inform citizens of their right to vote and to report any violations that may be experienced during the process such as intimidation and violence which may hinder them from fully enjoying their right to participate in the electoral process.

Without journalism people may be having their human rights violated and they will be unaware.

Journalism has a greater mandate of exposing human rights violations in communities. This is because the media through pictures, videos and text combined can clearly depict the extent of violation and the implications it imposes on the citizens. As the media speaks on behalf of the otherwise voiceless, it carries the mandate to amplify human rights violations inflicted on people in our communities.

For example during the January 2019 protesst, uniformed officers allegedly hunted down suspected protestors and beat them up severely. Because these people would fear reporting assault to people who allegedly assaulted them, the media stepped in to protect the identities of the victims while telling their story, prompting the police boss to release a statement that investigations would be opened into the allegations levelled against uniformed officers.

The fourth estate with its oversight role could also act as a tool for advocacy.

The media has an upper hand that authorities read newspapers and listen to news checking if they have been covered in the press for the god or the bad. It is easier therefore for media to advocate for recognition of human rights in our communities.

For example, the media covered the state of water supply in the city of Harare which was in disarray.

The rate payers and residents could not access water for days on end but were billed at the end of the month.

The right of access to clean water was grossly violated by the local authority and advocacy groups took the City of Harare to court so that they supply water and the situation has improved since then.

In the context of the current COVID19 pandemic, ZimRights has produced eight reports, including a policy brief highlighting community experiences and these have all been picked by the media, and the issues raised, which include police brutality, gaps in PPE provision, commodity shortages, among others, have been put on the spotlight.

In total, journalism and human rights cannot be separated because for our communities to develop to healthy democracies, they need the help of journalism.

Journalism also works to complement the work of CSOs and the two cannot do without each other.