MUTARE, Zimbabwe—Parts of Mutare in eastern Zimbabwe have suffered a water crisis for years after a tender to upgrade the city’s system was allegedly awarded to a company with no experience in major water infrastructure development. 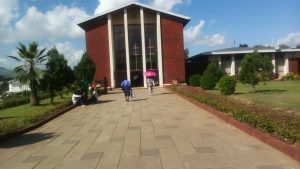 Following the botched tender in 2010, the city lost US$330 000 paid as deposit to Shitazburg Enterprises which was awarded a US$660 000 tender to replace old and smaller pipes with larger ones in the Dangamvura water project.

In 2009, Zimbabwe’s Ministry of Finance advanced a US$3 million loan to Mutare City Council to finance water and sewer systems in high density areas. Part of the loan was earmarked to upgrade the Dangamvura high density area water infrastructure.

After receiving the loan, the city fathers declared that the water problems would be solved within 12 months but eight years on, the company has failed to replace the pipes, neither has it refunded the US$330 000 paid as deposit.

The new mayor, Blessing Tandi, has maintained that Shitazburg Enterprises was corruptly awarded the lucrative tender. He said a councillor and two employees were implicated in corruptly awarding Shitazburg the tender.

“The councillor [implicated in corruption] was reported to the Ministry [of Local Government] and was dismissed and two [council] officers were also charged and dismissed by council,” Tandi said.

Councillor Exavia Upare, who back in 2010 chaired Mutare City Council’s procurement committee, was allegedly paid US$20 000 by Shitazburg Enterprises represented by its director Anderson Mwashita, to influence the tender in favour of his company.

But in an interview, Upare denied the allegations, insisting that as the chairman of the city council procurement committee he did not have a final say on which company could be awarded a tender.

“There were five or six members of the procurement committee and we made recommendations to the city council management and some of these recommendations were not followed. We handled the issue professionally and everything was done correctly,” Upare said.

But he admitted receiving US$20 000 from Shitazburg, which he claimed had nothing to do with the city council business.

However, Upare was elusive when questioned by this reporter about the nature of business he had done with Mwashita for which he was paid the US$20 000.

In 2011, Upare was arrested and brought before Mutare Magistrate Court facing bribery charges arising from the tender issue. He was later dismissed as city councillor by the then Zimbabwe’s Local Government Minister, Ignatius Chombo.

Then further down please replace with this section:

However, despite claiming his innocence, Mutare magistrate court found Shitazburg guilty of fraud in the tender deal.

The company was fined US$500 plus restitution of US$300 000 to Mutare City Council but has since appealed against the lower court’s ruling at the High Court of Zimbabwe.

The High Court has not yet sat to hear the case after initially throwing out the appeal for failing to submit his heads of arguments in time.

In its appeal to the High Court,  Shitazburg argued, among other things, that the trial magistrate had failed to decide that the contract between Shitazburg Enterprises and Mutare City Council was a prepaid contract and the company was not required to keep any amount equivalent to the deposit in its bank account. 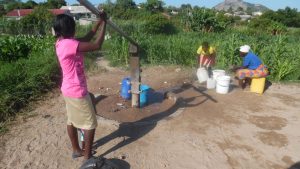 Dangamvura residents in Mutare, Zimbabwe get water from one of the boreholes in the area-Photo by Andrew Mambondiyani

Mwashita, who is currently based in South Africa, remains defiant, arguing that the city breached the contract by causing his arrest instead of following the provisions of the contract which clearly provided for arbitration.

“After all, the question of supplying pipes does not arise at the moment because the matter is before the courts. It’s going to be a bruising legal battle,” said Mwashita defiantly.

Mayor Tandi said the city paid a deposit of US$330 000 to Shitazburg because the water problem in the city was severe and needed urgent attention.

“With the urgency of the matter and gravity it deserves the company was advanced US$330 000 to assist it in the procurement [of the pipes] at earliest possible time,” Tandi said.

On Mwashita’s assertion that the city breached contract by causing his arrest, Tandi said these were public funds which due care should be taken and the quickest route was criminal case than civil case which could have taken time.

“I think it was the prerogative of council to choose any remedy it deemed proper,” he said.

Tandi added that while the reasons for failure to deliver the water pipes by Shitazburg Enterprises were not clear, investigations by the municipality showed that the company did not channel the advance payment to its intended use.

He said the request for technical drawings from city council by Shitazburg was done in August 2011 when the tender was awarded in 2010.

“The company had been providing different delivery dates all it failed to meet,” he said.

But Mwashita argued that if the council had that prerogative of taking an action deemed fit and not provided for in the contract there was no reason for signing the contract in the first place.

“If the council had that prerogative of taking an action deemed fit and not provided for in the contract what was the purpose of signing it [contract] in the first instance?” Mwashita queried.

A water tank which supplies water to Dangamvura residents in Mutare, Zimbabwe-Photo by Andrew Mambondiyani

Glimmer of hope for frustrated residents

However, Mutare residents are both frustrated and livid, with fears abound that the growing water shortages will soon result in a spike in cases of serious diseases like typhoid and cholera.

However, Tandi said a few cholera cases which were index cases with no secondary cases had been reported in Dangamvura and health education workers were on the lookout for possible outbreaks.

But 34-year-old Chenai Mahumbe, a Dangamvura resident was visibly frustrated as she narrated the apparently unending water crisis in her area.

Every day, many residents in this suburb crowd for water at the few boreholes but health experts have raised fears over the safety of the borehole water to human health.

“Our situation is so dire and we wonder when we shall stop travelling long distances to fetch water in a city suburb for that matter,” Mahumbe said dejectedly.

And the United Mutare Residents and Ratepayers Trust programmes director, Edson Dube alleged that some councillors and council officials got kick backs to award the tender to a company which had no capacity to provide the water pipes.

“As an association representing the residents we were not however favoured with the documents pertaining to the water tender. The council was not willing to give us the documents with all the information related to the tender. If you dig deeper you will find that this company was corruptly awarded the tender,” Dube alleged.

However, Mayor Tandi revealed that the city was expecting a loan for the water project to be signed this year between Zimbabwe’s Ministry of Finance and African Development Bank.

Research carried out to develop this publication was supported by the Water Integrity Network (WIN). The content and statements made here are editorially independent and express the views of individual contributors, not those of WIN.