To many agricultural extension officers in the Midlands Province, being deployed to gold-panning prone Shurugwi district and being expected to bear fruit, steering farmers to a bumper harvest is a nightmarish task, too hard to contemplate, let alone accomplish.

This is simply a gold panning area.

One has to be patient, resilient and rather aggressive in trying to convince the Shurugwi community — forever fixated and preoccupied with artisanal gold mining — how farming could be another lucrative business option outside excavating the belly of the earth.

“I was once posted to Shurugwi district as an extension officer there and I had a hard time trying to convince villagers to discuss farming.

“No one cared about farming, their preoccupation in mining, they don’t even care to know how to do proper farming because farming here is predominantly subsistence and they don’t care much about what one must do to improve yields,” recalls one Agritex officer, Mrs Elizabeth Gumbo.

Endowed with vast gold deposits, platinum and chrome, it is a common dream for every dweller to this rugged countryside — the young and old, men and women — to one day own a mining claim and mole the reach soils.

Here, the Great Dyke — forever pregnant with an array of minerals — starts its long winding 570km journey to the north on the central plateau, creating the backbone of Zimbabwe.

The majority of the Shurugwi folks resort to gold panning in their fervent  desire to  grab a share of the area’s mineral riches.

It is thus common to come across men and women in their ethereal caricatures — their tattered clothes hued by the sticky red soils of the area.

But for a local woman, Mrs Ruth Gara, when the Government introduced the Pfumvudza/Intwasa farming initiative, she just thought of trying her luck in farming.

Wife to one of the prominent miners in the Shurugwi mining town, Mr Nicholas Gara, Mrs Gara said she had been planning to venture into farming for some time and got support from her husband.

For her magic wand in the farming field where she got much-needed support from Government’s Pfumvudza programme, Mrs Gara was nominated the best female farmer in Shurugwi district and a field day was recently held at her plot where extension officers took the chance to try and convince the community that farming could also be of great business option.

Mrs Gara, who is expecting to harvest between 10 and 15 tonnes of maize per hectare at her 8ha plot, says she was elated to be nominated one of the best farmers in the district this year.

She looks set to expand her hectarage this year

“For the greater part of my time, I have been working with my husband at his mine and another hospitality business but decided to start my own business and venture into farming to supplement our  business.

“I am, however, seeing value in farming and I intend to extent the hectares under farming this year,” she said.

Mrs Gara said she has also taken advantage of the available water which was being pumped out of the family mine to introduce irrigation at the plot. 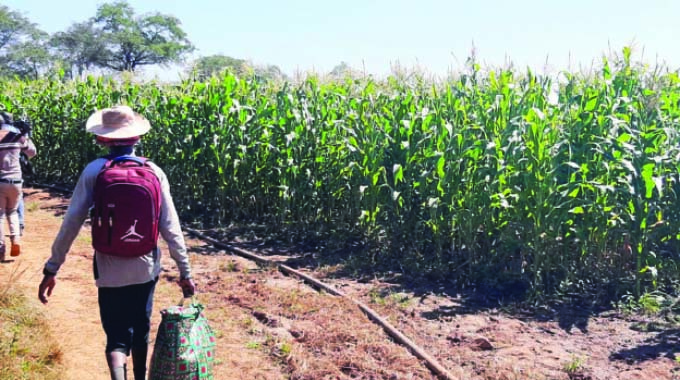 “The plot is near our mine, so for some years, my husband has been using heavy duty pumps to pump out water from the mine and all the water has been going to waste.

“I then pitched an idea to introduce irrigation, taking advantage of the available water and my husband agreed to that. So far I have three hectares under irrigation and we have been also growing potatoes,” she said.

Mrs Gara said the potatoes were being  sold to the local community in Shurugwi while the other produce was being supplied to the family lodge.

“We own a lodg,e so much of our produce we supply the lodge and we are beginning to see value in farming,.

Meanwhile, Shurugwi North Member of Parliament Cde Rabson Nyathi, who also  attended the field day at the Gara family donated a heifer to Mrs Gara for being an outstanding farmer in the district.

He urged Shurugwi farmers to take farming as a business as the country seeks to  retain its break basket for Southern Africa status.

“I am happy that we have two women who did very well this year under the Pfumvudza Government programme in Shurugwi. One of them is Mrs Gara and for their feat, I have donated a beast to each to these women.

“As a country we need to produce what is sufficient for the country so that next time, we produce surplus for export. This is why Government introduced many programmes like the Pfumvudza and Command Agriculture. We also need women to take leading roles in feeding the nation,” he said

While many local authorities have battled to contain urban and peri-urban farming, the Shuriugwi town council and its sister local authority, Tongogara Rural District council have their own unique headache to deal with — the panners.

They have to be contend with wanton degradation of their localities as panners go about ripping open mother earth in search of the precious mineral.

Today, Shurugwi town and its environs are in a sorry state with vast open pits and gullies that have been left unreclaimed as panners callously rip into the underground.

Very few people in the district believe in any other business to eke out a living, outside mining and gold panning, let alone farming.