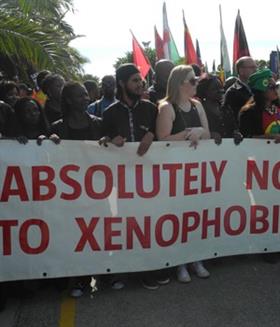 Minister of International Relations and Cooperation Lindiwe Sisulu has expressed serious concern about the current spate of violence against foreign nationals and damage to their properties in Kwazulu-Natal.

In remedy, Sisulu has called an urgent meeting of African ambassadors to discuss the matter.

She has simultaneously called on law enforcement officers to deal with criminals and those damaging properties with the full might of the law.

This comes after a graphic video and imagery did the rounds on social media this week wherein protests erupted and foreign nationals were attacked, with police having to intervene in the areas of and surrounding Kenville, Inanda Road and Sea Cow Lake in Durban.

AT least two people have died in the violence so far.

“The shop owners opened fire, fatally wounding a 22-year-old man in the neck and wounding other two victims who were rushed to hospital for medical attention. Later a second victim died in hospital,” Lieutenant Colonel Thulani Zwane told News24 earlier in the week.

On Tuesday night, local residents raided the homes of foreign nationals, forcing them to seek refuge at nearby police stations and mosques.

On Wednesday morning, 20 people sought shelter from a mosque in Crescent Street in Overport, Durban, after they were attacked at Jadhu Place informal settlement in Springfield Park.

Sisulu said that the African continent had contributed and sacrificed a lot for South Africans to be free and be liberated from the apartheid government.

“South African companies and our citizens are welcomed and loved across the continent: here at home, we should do the same, we must embrace our neighbours and fellow Africans” Sisulu said.

“South Africa has been supported by all African countries and many countries in the world to have a non-permanent seat in the United Nations Security Council; it is currently the Vice Chairperson of the African Union (AU) and the Chair of AU in 2020. These responsibilities require that we must welcome and lead in building bridges between nations, particularly in Southern African Development Community  (SADC) and the continent”.

Sisulu said that a strong message against violence, all criminal activities and looting of properties of foreign nationals need to be sent and that the police and other law- enforcement agencies must act without fear or favour.

The minister said that the meeting, which will happen as soon as possible, will focus on how ambassadors and government can work with communities and all stakeholders to support and encourage integration in communities.

The eThekwini municipality and the Malawi High Commission have denied that the violence in Durban was xenophobic, on Friday reducing it to being criminality .

The EFF has joined civil organisations in condemning the attacks.

“We reject this as the greatest form of self-hate amongst African South Africans [and] whatever the grievances, nothing justifies hatred-driven violence against African foreign nationals,” said spokesperson Mbuyiseni Ndlozi.

“We call on authorities to take a no compromise, no nonsense and tough action against any xenophobic driving violence.”