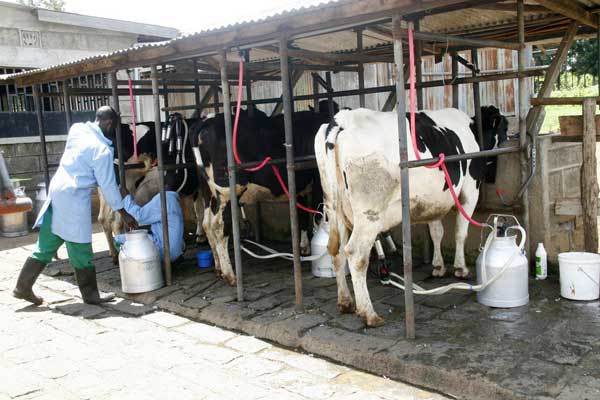 BY MTHANDAZO NYONI
ZIMBABWE’S small-scale dairy farmers are struggling to sustain their operations, with some registering an average negative gross margin of up to US$83,47 per cow, a new report has revealed.

This figure is way below the estimated local milk demand of 130 million litres per annum.

According to the Transforming Zimbabwe’s Dairy Value Chain for the Future (TranZDVC) policy paper on sustainable and standardised milk pricing policy (2021), the gross margin per animal for small-scale dairy farmers of two lactating cows has been adjudged to be unprofitable.

“The results ultimately show that small-scale dairy farmers are not economically viable, unless they adopt on-farm feed processing to cut the cost of feed, which is the major contributor to high production costs.”

“Return per dollar invested and gross margin per litre basis were found in the milk pricing study to be both negative at US$56,77 and US$0,13, respectively.

“The gross margin per animal for medium and large-scale dairy farmers was positive, at US$182,82 and US$831,36, respectively, implying that the enterprise at both production scales is viable.”

From the current scenario, ZAGP said the average milk producer price is only 23% of the final consumer price of US$1,60 per litre.

Such a scenario seems to imply that vertically integrated processors get a larger share of the profit margin compared to milk producers.

“Consequently, the performance and sustainability of the Zimbabwean dairy value chain is compromised and growth is inhibited.

“As much as duty-free powders cover the shortage gap in raw milk supply and demand, there has not been a supply and demand matching aspect considering optimality to promote sectoral growth and since such a challenge has been noted there is no stable and sustained growth until such areas are managed at policy level,” it said.