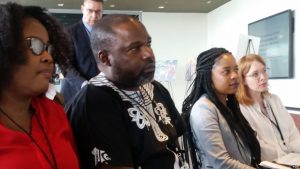 WASHINGTON — Some Zimbabweans and political observers say it is likely that President Emmerson Mnangagwa will win the forthcoming presidential election, to be held between July and August this year, as the country’s opposition is in disarray though they doubt that the southern African nation will hold a free, fair and credible election.

Wadzanai Mhute of The New York Times, Charles Mutuma of the Zimbabwe Diaspora for Democracy and Linda Mujuru of Global Press Journal.

The Zimbabweans, who were panelists at an event Thursday organized by the Global Press Institute hosted by the Newseum in Washington DC focusing on political issues in Zimbabwe, said they are convinced that Mnangagwa will romp to victory in the forthcoming presidential election.

One of the panelists Linda Mujuru of Global Press Journal says the opposition is too weak to challenge Mnangagwa.

“Mnangagwa is likely to win because there is no strong opposition and there is so much confusion within the opposition parties such that Mnangagwa is the likely option for most people and is the one in power and they say that there is a lot of effort from Mnangagwa to change things. People are more receptive to that.”

She adds that Nelson Chamisa, who is currently locked in a battle with vice president Thokozani Khupe over the leadership of the MDC-T, once led by the late Morgan Tsvangirai, may lose the presidential poll even if he is attracting a large number of people at his election rallies.

“The thing is that with rallies there are people who are coming to see him talk about his political party and what he is promising people. But does that translate to a real vote and have those people registered to vote? That’s a question that needs to be answered and what we are seeing on the ground is that Mnangagwa is more organized and Chamisa has just come in after the death of Morgan Tsvangirai and we don’t know that the people that are coming will vote for him.”

Her views were echoed by Wadzanai Mhute, a multimedia producer, author and reporter with the New York Times, who says the disjointed opposition is giving Mnangagwa a win on a silver platter.

The MDC-T led by Chamisa recently filed an urgent court application to stop Khupe from using the party name and logo, which was dismissed with costs by High Court judge Justice Francis Bere. Another court case is pending in which Khupe is challenging her withdrawal from parliament by the Chamisa group, which claims that she is no longer a member of the opposition party.

Charles Mutuma, executive director of the United States-based Zimbabwe Diaspora for Democracy, says apart from this, it is likely that the opposition will be disadvantaged by lack of electoral reforms and related issues.

“Based on the electoral environment and electoral mechanisms the situation and the environment is heavily tilted in favor of the incumbent. So, the opposition’s chances of winning are next to nothing if we do not address the unresolved issues of the government of national unity on the issue of security sector reforms, judiciary reforms and electoral reforms.”

He says Zimbabwe is heading for another disastrous election. “We are heading towards a shameful election and once again a disputed election … My justification is Deputy Justice Minister Ziyambi Ziyambi ruling out the diaspora vote. It means the election won’t be inclusive. It’s not honoring the rights of Zimbabweans to vote according to Section 67 of the Constitution and when we look at the Zimbabwe Electoral Commission it’s not impartial.”

Irene Petras of the International Center for Not-for-Profit Law says the opposition should unite if it wants to defeat Zanu PF in the forthcoming general elections.

Some nations like Britain are already attempting to strengthen relations with Zimbabwe following a fallout with former ruler Robert Mugabe, who was removed from power last year by Mnangagwa aided by the Zimbabwe Defence Forces in what the former president has described as a military coup.

Award-winning British journalist Paul Kenyon, host of the BBC Panorama program, says Mnangagwa is expected to win the election, which is expected to be almost free and fair.

“He knows that the world is watching. I think it will be subtle the manipulation but everyone I spoke to on the ground says ‘is it conceivable that Mnangagwa won’t win’ … No it’s not conceivable he will win part of that is because the opposition is in, it’s not a lot of time to organize. They don’t have the root there that they built up over generations, over decades where people have the, you know, they are not used to using opposition power, they are not used to exercising opposition power. They are not used to understanding how you go campaigning, putting those messages out there. All those things which are lost when you have an authoritarian regime of people like Mugabe.”

He says Britain will always relate well with nations creating democratic space for its citizens.

“I think the British will go to any country realistically saying ‘we are changing the way we behave we are becoming more democratic’. The British will go there and yes they will be looking for trade deals but they will also be interested in exercising some kind of diplomacy to make Zimbabwe come out of this a better place.”

The British and then President Mugabe’s government clashed in 2000 when the ruling party grabbed white-owned commercial farms under its land reform program widely condemned for causing a near-collapse of the agricultural sector.