A nurse at the Lancet Nectare hospital in Johannesburg waits for the next patient to perform a COVID-19 coronavirus test [File: Luca Sola/AFP]

South Africa has reported at least one million cases of coronavirus since confirming its first case in March, the Ministry of Health said late on Sunday, only days after a new faster-spreading variant of the virus was confirmed to be breaking out in the country.

“Today, we have breached one million cumulative cases of COVID-19 in South Africa, with a cumulative total of 1,004,413 cases reported,” the ministry said in a statement.

The outbreak in the worst-hit country in Africa appears to be accelerating with the one million mark crossed nine days after the country reported 900,000 cases. It took two weeks for South Africa to reach 900,000 cases, compared with the 800,000 in early December.

Several hospitals and medical centres have reported wards overflowing with patients with many healthcare workers cancelling their holidays to tackle a huge influx of patients.

Mediclinic International, among South Africa’s top three private hospital networks, said on Sunday that a severe rise in cases had placed immense strain on its healthcare resources including staff, equipment and beds for seriously ill patients.

The numbers of patients seeking care within our hospitals has exceeded previous numbers during the first peak and the majority of our ICU and High Care units are operating at capacity,” the company said, referring to the Western Cape province. 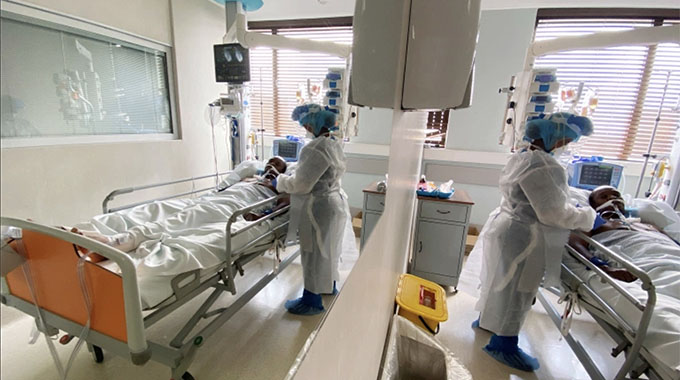 A nurse works with a COVID patient in a special ward at Arwyp Medical Centre on December 25 [File: Shafiek Tassiem/Reuters]

The new variant, referred to as 501.V2, was discovered by a team of scientists around South Africa who have been tracking the genetics of the virus. The variant appears to be focused in the south and southeast of the country and has been dominating findings from samples collected since October, they said.The Coronavirus Command Council, the top government body monitoring the disease, met on Sunday to decide whether further measures such as a tighter lockdown or stricter rules on public movement should be imposed, according to local media News24. President Cyril Ramaphosa could give a television address later this week.

The number of daily cases in South Africa has already crossed the July peak. On December 25, it reported a record 14,796 cases.

Since the new variant was announced, several countries have cancelled flights to the country, and banned South African nationals.

South Africa has reported the most cases of COVID-19 in Africa, followed by Morocco and Egypt. -Aljazeera