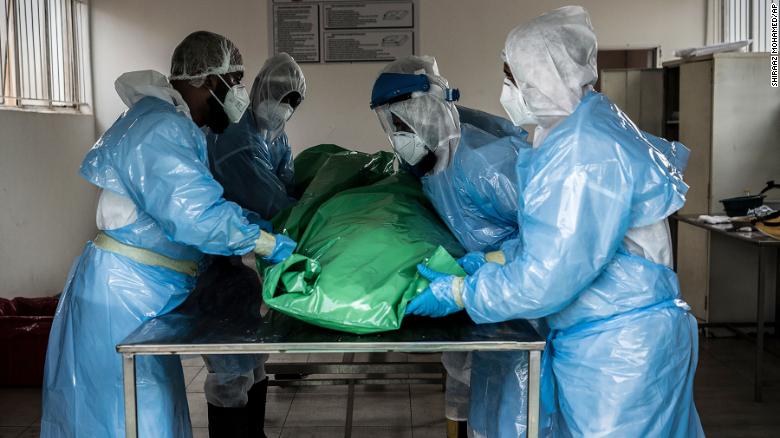 Members of the Saaberie Chishty Burial Society prepare the body of a person who died from COVID-19 at a Johannesburg cemetary Saturday Dec. 26, 2020. South Africa’s health minister has announced an “alarming rate of spread” in the country.

(CNN)South Africa has reported a “grim milestone” with 844 deaths and 20000 new Covid cases reported in 24 hours on Wednesday, sparking fears of stricter lockdown measures as the country battles with an influx of immigrants from neighboring Zimbabwe.

Covid cases have spiked to unprecedented levels since the start of the year, and the government has announced plans to roll out a vaccine program this month.
South Africa is one of the worst-hit African countries, with more than one million cases and 31 368 deaths, as of Wednesday.
Health Minister Zweli Mkhize announced Thursday that the country will receive 1.5 million Covid-19 vaccines from the Serum Institute of India.
The minister said the first million doses will be arriving this month, with the remainder delivered in February. Priority will be given to South Africa’s more than one million health care workers in both the public and private sector in the first round of inoculations.
At the same time, there are heightened fears of a humanitarian crisis at the country’s border with Zimbabwe where hundreds of workers have been blocked following a national lockdown that bans cross-border travel by the Zimbabwean government.
Hundreds of returning residents faced chaotic scenes as authorities delayed clearing the travelers, most of whom had traveled for the Christmas break.
Video footage and images of Zimbabweans sleeping at the border have sparked outrage on social media as the Zimbabwean government downplayed the crisis.
Zimbabwe’s Information Secretary, Nick Mangwana told CNN: “There is no situation. There is no problem on the South African side. Zimbabweans who are there wanted to beat the lockdown deadline and most of them were cleared by Tuesday at 3 pm.”
South Africa Home Affairs Minister, Aaron Motsoaledi however admitted that a humanitarian crisis was brewing at the Beitbridge border.
“It is clear a humanitarian crisis in unfolding. I have seen the pictures. People are trying to escape the Zimbabwean hard lockdown and the curfew there,” Motsoaledi said.
The slow pace of clearing travelers and verifying their Covid-19 certificates by South African authorities has caused frustration among Zimbabwean immigrants.

Some travelers, including truck drivers, have been stuck for four days without food or shelter, according to local media reports.

The government responded to the second wave of infections by moving the country back into lockdown level 3 on December 28, setting tighter restrictions on social gatherings, and an alcohol ban.

They also enforced the mandatory wearing of face masks.