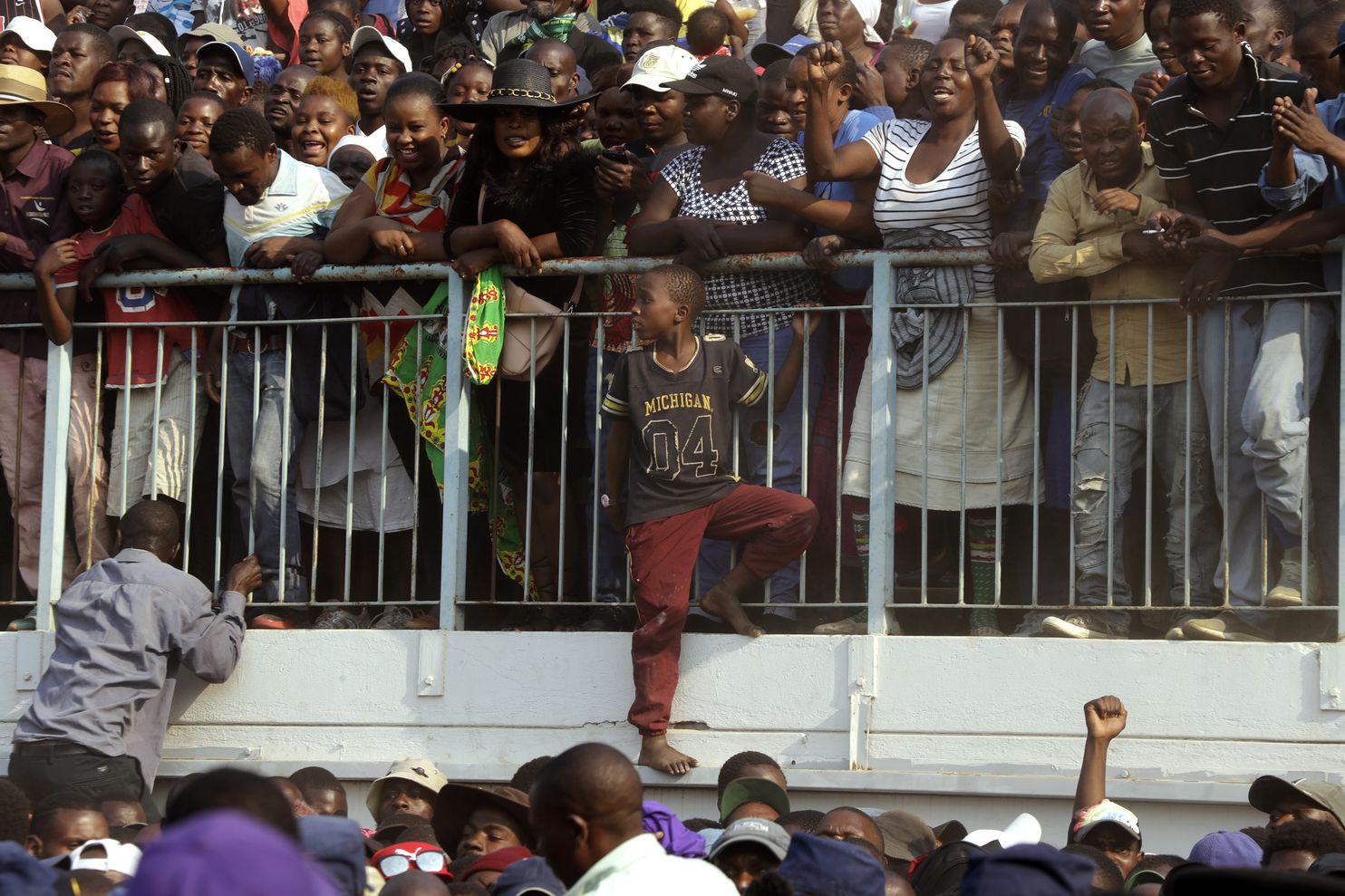 THOUSANDS of people yesterday stampeded to view the body of the late former President Robert Mugabe at Rufaro Stadium, where he took his first oath as the country’s founding Prime Minister at midnight on April 18, 1980, ending a century of British colonial rule.

Mugabe’s body arrived at Rufaro around 2:30pm when the stadium was almost full, with many people still trickling in to pay their last respects to the man who ran Zimbabwe for 37 years until he was toppled in a coup in November 2017.

People, most of who clad in Zanu PF regalia, particularly the former leader’s 2013 campaign material, had to be stopped several times to allow some order as they stampeded to the centre of the stadium, where Mugabe’s casket was perched for body viewing.

The two hours allowed were too short for all the people to see the body, forcing security to ask the stampeding people to come today, early in the morning, to join the queue to see Mugabe’s body before it heads to the National Sports Stadium tomorrow for a State funeral.

About 11 heads of State have confirmed attendance so far apart, from former Presidents who form the bulk of Mugabe’s friends, according to President Emmerson Mnangagwa yesterday.

The body arrived late due to haggling between Mugabe’s family and government over his burial site that dragged on until midday.

Mourners and journalists had a torrid time waiting for an announcement on Mugabe’s burial site that never came.

Cameras were moving from one direction to another to make sure they catch any announcement from top relatives coming in and out of the Mugabes’ expansive Blue Roof mansion.

The most anxious moment was when Mnangagwa and former First Lady Grace Mugabe were meeting at the same time the Mugabe family elders were also meeting to consult on the nationalist’s burial arrangements and site.

It was another “Asante Sana” moment when Mugabe’s relative Walter Chidakwa addressed the people after the meetings, when people anticipating to hear of the former leader’s burial site were left disappointed.

Still, there was no way forward, with family spokesperson Leo Mugabe disclosing plans for his uncle’s burial were still to be made.

That was after Mnangagwa had just left, with most people hoping his presence and meeting with Grace would birth the breakthrough that will likely save the Zanu PF leader international embarrassment.

“It seems the rural burial is carrying the day,” a colleague journalist whispered to this reporter.

Back in the tent, a gust of wind that blew tents and damaged a commuter omnibus door at Mugabe’s mansion at the time the plane carrying his body was touching down at RGM International Airport was the talk of the day.

“It was scary. The wind was very strong. You see that tent, it swayed from side to side until it went down. Even a kombi that was parked close was damaged by the wind,” one woman told a colleague.

“It happened around 4pm. That was when the body of the former President had just arrived. Hope it was just a natural occurrence and not a strong message that was being conveyed.”

Later, when there was doubt that his body would be carried to patiently waiting supporters at Rufaro, two helicopters landing at the Blue Roof to pick up Mugabe’s remains became the centre of spectacle for some mourners from rural areas, who appeared to be seeing the choppers for the first time.

Before Mnangagwa arrived at the Blue Roof, it was MDC leader Nelson Chamisa who sent journalists and some mourners to their feet, rushing in the house to take pictures of the opposition leader consoling Grace.